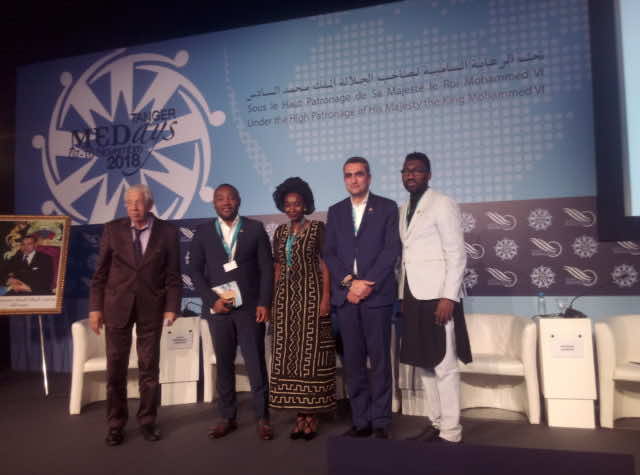 Rabat – That optimistic sentiment was the conclusion of MEDays 2018’s only panel on art and design in Africa.

The panel featured go-to names in the Moroccan artistic landscape, such as Hicham Lahlou, a leading Moroccan designer; and Nourredine Ayouch, a household name in the Moroccan and African world of media and art.

The other two panelists were Kwame Kwel Armah, the UK-based artistic director of the Word Festival of Black Art, and Hampate Bah Roukiatou, president of the Amadou Hampate Bah foundation.

Together, they discussed how coordinated African policies to disseminate and popularize African art can shape the way forward for Africa on the global stage.

Even if art cannot literally end the numerous crises that the African continent is facing today, it does provide an opportunity of self-expression for many Africans striving for meaning and socio-economic prosperity.

“As it breaks barriers and fosters communication, art can bring our continent together,” said an optimistic Hicham Lahlou. Speaking about the role design and art can play in realizing African unity, the Moroccan designer extolled the unifying virtues of artistic creation.

“Being a designer or an artist is not only about working alone in your corner of the table,” he said.

As well as adding beauty and color to ordinary things, the work of the artist or a designer adds meaning to individual’s lives. A design or a song often is the reflection of the soul and identity of a whole people.

But besides these traditional roles associated with artistic endeavor, art does practically contribute to economic development.

Lahlou explained: “I was recently reading an article in Les Echos—a leading French magazine on economy-related matters—and I remember the article’s author saying that the art industry contributes six times more to [France’s] GDP than the automobile sector.”

An avowed lover of colors and sounds, the Moroccan designer explained how Africa’s colorful creativity stems first and foremost from its uniquely diverse linguistic landscape. With an estimated 2,200 languages spoken across Africa, the continent can pride itself in being a repository of boundless creative potential.

In fact, the Moroccan offered, “There is already a lot to be proud of in Africa. There is so much going on. So many talents both established and emerging. All that remains is to promote them, give them platforms to express themselves and contribute to the rise of the continent. Africa is not the future; now is the time for Africa.”

In a burst of validations, other panelists resoundingly agreed with Lahlou. Though in different tones, reflective of their backgrounds, they all argued that “a society’s artistic creation plays a key role in how its people are perceived by outsiders.”

According to Hampate Bah, a crucial challenge of contemporary Africa is to “reclaim our sense of being in the world and wash away the inferiority complex” associated with being from Africa. “We need to be proud of our intangible heritage,” she asserted.

For his part, Ayouch put a strong emphasis on the importance of communication in bringing Africa’s creative talents to the global stage.
“Without communication, even the greatest talent can easily fade away, unknown and unexploited.” He explained that African governments and businessmen should invest more in nurturing the many unexplored talents on the continent, giving them space to produce beauty and alter how Africa is perceived by others.

Kwame Kwel Armah, the panel’s last speaker, echoed the same belief in art’s transformative powers, though in more philosophical language.
“Disruption,” he began, referring to MEDays’ 2018 theme—In the Age of Disruption: Finding the New Paradigms—“does not require new tools.” To disrupt all you need is to know the tools at your disposal, he asserted.

The suggestion, as he went on to articulate, is that only by internalizing and espousing the “African spirit” can the African continent rise to the challenges facing its countries and people.

Calling for a demystification of European universality, the UK-based artist and drama director spoke extensively of “how the way we think about our art can usurp the notion of European superiority.”