The Saudi-led coalition has stopped its attacks on Iranian-backed Houthi militants in the port city of Hodeidah.

Rabat- Saudi Arabia’s halt is seen as a response to international pressure to end the war.

According to a pro-coalition military source, “The coalition has instructed forces on the ground to halt fighting inside Hodeidah.”

Violence in Yemen’s Red Sea port city has de-escalated over the last two days. Saudi coalition airstrikes have decreased despite the bombing of a bus carrying fleeing civilians on Wednesday, which killed seven and wounded four.

The port of Hodeidah functions as a lifeline for humanitarian aid to over 14 million Yemenis, acting as an entry point for 80 percent of Yemen’s food and supplies. The United Nations has warned the blocking of Hodeidah’s port will worsen the humanitarian crisis in Yemen, putting millions of starving people at risk of widespread famine.

The killing of journalist Jamal Khashoggi in the Saudi consulate in Istanbul in October has also increased international scrutiny toward Saudi Arabia’s foreign policy in Yemen.

In response to mounting international pressure, Saudi Arabia and the UAE are ready to engage in UN peace talks mediated by UN Special Envoy Martin Griffiths.

Saudi Arabia’s foreign minister, Adel al-Jubeir, announced the kingdom’s support for the UN-led peace conference on Thursday: “We support a peaceful solution in Yemen and we support the efforts of the U.N. special envoy to Yemen.”

Colonel Turki al-Maliki, the spokesman for the Saudi-led coalition, would not confirm the halted offensive as a ceasefire, saying military operations will continue. “Each operation has its own specifics and pace,” said al-Maliki. 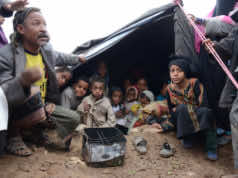