A new World Bank report has noted the high rate of “passive learning” and “violent discipline” in Morocco, urging the country to change its pedagogical methods. 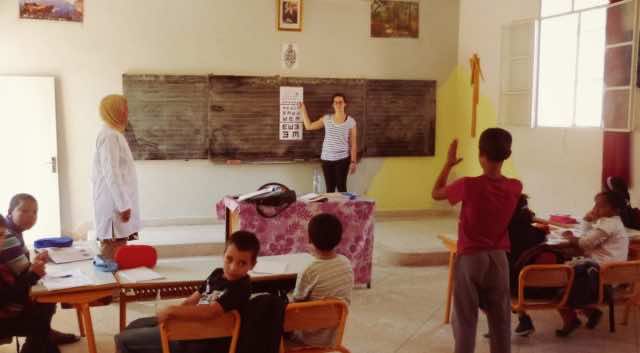 By
Ahlam Ben Saga
-
Ahlam Ben Saga is a Cultural Studies graduate from university Mohammed V of Literature and Humanities in Rabat.
Nov 16, 2018
Spread the love

Rabat- The report, “Expectations and Aspirations: A new framework for education,” suggests that teaching methods throughout the MENA region are highly focused on memorization and do not provide much scope for students to develop their imagination and critical thinking skills.

Morocco and other MENA countries’ curricula rely heavily on rote learning, memorization, and repetition. According to the research, 60 percent of  eighth-grade students in Morocco are required to memorize facts and mathematics and science rules, and the “procedures” of most lessons, if not all.

The report gives the example of Canada and New Zealand, emphasizing that only 10 percent of their eighth-graders are required to memorize during mathematic lessons.

In Sweden and the United States, 11 percent are required to memorize, and 14 percent are in Ireland and Singapore.

The study reasons that when students are only required to memorize rules, procedures, and facts, they become unable to exhibit a basic understanding of day-to-day applications.

The hypothesis is tangible in Morocco. Fewer than half of fourth-graders could read a basic graph in the North African country, according to the 2015 Trends in International Mathematics and Science Study (TIMSS).

Egypt and Saudi Arabia are not any different. Only 55 percent of Egyptian and Saudi eighth-graders could interpret a basic pictogram.

As for reading literacy, only 36 percent of fourth-graders reached the “low” international benchmark.

Students in the MENA countries are in dire need of their teachers’ guidance to develop flexible knowledge and skills “that can facilitate independent, complex cognitive work.” The World Bank argues that there should be a balance between rote memorization and high-level problem-solving.

The report states that “the region has great expectations and aspirations. Unleashing the potential of education is attainable, but it will take a commitment by all to make education not only a national priority but also a national emergency.”

The substantial overlap in pedagogical methods and labor market issues, says the report, can be explained by “post independence trajectories.”

Morocco, colonized by France for 44 years until 1956, has faced challenges concerning “education quality and learning outcomes” like other MENA countries.

“However, the power of education to build human capital and to create change depends on its quality, its access to complementary economic and social environments, and its ability to leverage technology smartly,” the World Bank states.

Discipline in Morocco and other MENA countries

Another issue that hinders the pedagogical progress in MENA countries, according to the report, is violent discipline.

The World Bank recognizes that some degree of discipline is necessary, however, violent discipline negatively impacts the psychological health of students and hampers their performance at school.

Unfortunately, violent discipline is prevalent in schools in the MENA region. UNICEF’s 2013 study of 50 countries suggests that MENA countries have the highest rate of violence targeting children aged 2 to 14

Some 79 to 95 percent of young students in Yemen, the West Bank and Gaza, Tunisia, Iraq, Algeria, Syria (pre-conflict), and Morocco are violently disciplined.

Absenteeism, ‘a chronic problem in MENA’

Teacher absenteeism, when teachers stay home from school without good reasons plague Morocco and the rest of the MENA region.

The World Bank considers this a “chronic problem” that hampers the school systems.  Among MENA countries participating in TIMSS 2015, 16 percent of eighth graders were enrolled in schools whose teachers were absent regularly.

School principals reported that teacher absenteeism is a “serious problem.” The problem is more acute in Morocco, affecting 28 percent of students, the report said.

Morocco is followed by Saudi Arabia, Oman, and Egypt.

Lack of teachers and financial support is also an issue in Morocco.

Morocco’s Court of Auditors identified similar serious deficiencies in both public and private schools in August.

The court noted that some schools have multiple grade levels in one class.

Minister of National Education, Vocational Training, and Scientific Research Said Amzazi pledged in July that his ministry would launch a national program of generalization and reform of pre-school education in Morocco.

Reforming preschool practices is a first step in recognizing the concerns in primary and secondary school.