The National Meteorological Directorate (DMN) forecasts rain, snow, and much cooler temperatures throughout the country.

Rabat- Cloudy skies and rain showers are forecast in the Rif, Souss, the Oriental, the Mediterranean, northern and central regions, and the southern provinces.

More snow is in store this week for the High and Middle Atlas mountains, with a predicted snowfall of 1 meter and 7 centimeters.

Gusts of chilly wind are ahead in the northern and central Atlantic coats.

Sea levels are moderate to high in the Strait of Gibraltar, Tan-Tan, Boujdour, and the Mediterranean. 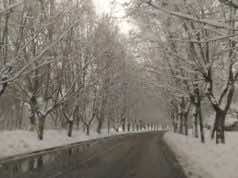 Morocco to Get April Snow, Rain Over Weekend