Morocco’s second surveillance satellite, Mohammed VI-B, got off the ground Tuesday night from the spaceport in French Guiana.

According to NASA Spaceflight, the final countdown before the satellite left the ground began nine hours and ten minutes before Vega’s scheduled liftoff.

NASA Spaceflight also gave details about the launch, saying that the “rocket’s key systems were powered up, with the multi-functional unit (MFU) that controls Vega’s electronics, turned on at the T-6-hour mark in the count.”

The final two steps before the satellite was launched came about 145 minutes and 75 minutes before liftoff, “with the rocket reaching launch readiness at the fifty-minute mark in the countdown.”

Mohammed VI-B is the French Arianespace company’s ninth air projects this year. Through the launch, Vega reached a record of 13 successful launches, according to Space News.

Thales Alenia Space produced the satellite as the system’s prime contractor and Airbus as c-prime, according to NASA spaceflight.

The Mohammed VI-B satellite is capable of taking double the number of images that Mohammed VI-A can take with a resolution of up to 70 centimeters.

Both Morocco’s satellites will work together to ensure strong surveillance for the country’s border and coasts and to manage natural disasters.

Weighing 1,110 kilograms, the satellite will also be used for mapping and agricultural monitoring.

The satellite will be piloted from Morocco and will fly at the same orbit as the first satellite, 620 kilometers above the earth.

On November 13, Arianespace said that the satellite will be complementary to Mohammed VI-A and will “jointly enable a faster coverage of zones of interests.”

The satellite information will also help Morocco to have a better observation of the territory, in terms of forest fire control and anticipation.

The North African country can anticipate climate variations such as drought or floods. It will also help in case of natural disasters such as earthquakes or fires by showing a cartography of affected areas.

The government plans for the satellites to help security agencies track any terrorists or drug trafficking across borders, especially in the Sahel regions.

Each satellite has a role to provide military services information to ensure national security. The government acknowledged throughout the year that the first satellite helped the country to track illegal activities of the Polisario Front.

Morocco is the third African country to have a reconnaissance satellite after Egypt and South Africa. 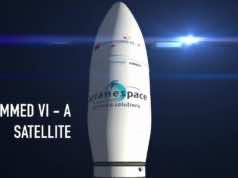