The long awaited ecocity of Zenata has just received backing from the United Nations as part of Moroccan development plan.

Rabat – The United Nations Industrial Development Organization voiced its support for the construction of the Zenata eco park, planned to be near Casablanca. Planning for the city began in 2006 between King Mohammed VI and the Deposit and Management Fund (CDG).

Creation of the Zenata Company (SAZ) began the same year, according to the company’s website. Zenata is Morocco’s first eco city to be built, but construction has moved at a slow pace since the project’s inception.

UNIDO released a statement of support for the project on Monday, restoring hopes that the project will now have a timely completion date. The eco-city is part of  Morocco’s Industrial Acceleration Plan 2014-2020 being supported by UNIDO. UNIDO is a Swiss-funded global program, and one of its missions is the support of eco-cities around the world, the organization’s website, noted.

SAZ is planning for the city to hold 300,000 inhabitants and create 100,000 new jobs. Jobs will come from the large number of business opportunities included in the initial plan.

The plans include an integrated medical center, a university campus, and a shopping center. The city’s shopping center is set to t include an IKEA and will be the largest shopping center in Morocco, global development site Devex reported. The city is part of a larger agreement, Morocco’s Programme for Country Partnership, between UNIDO and Morocco.

An eco-city’s goal is to promote businesses development and residency while maintaining a low level of carbon emissions compared to conventional cities.

The Zenata eco-city plans to keep its carbon footprint low by using the area’s natural resources and constructing ecological corridors to maintain natural flora and fauna. Thirty percent of the city is planned to be ecological “green spaces,” and natural cooling will occur through winds from the Atlantic, says city planners. 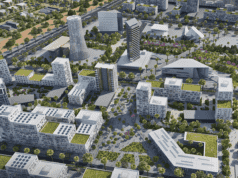