Morocco and Kenya have agreed to increase bilateral trade while a Moroccan delegation is in Nairobi for the Sustainable Blue Economy Conference.

Rabat – The conference aims to discuss issues included in the “2030 Agenda for Sustainable Development” including economic and social development, environmental sustainability, and water conservation.

“With an ambitious and forward-looking Royal Vision for Africa, Morocco has launched an unprecedented momentum on the continent that has earned it the position of Africa’s second largest investor on the continent, with over 60% of its [foreign investments directed] to Africa, and allowed a presence of Moroccan companies in 40 of the 54 African countries,” said Jazouli during the meeting.

According to data from the Moroccan Exchange Office, the 2017 trade balance between Morocco and Kenya was approximately MAD 262.82 million.

Morocco exported MAD 157.02 million worth of resources to Kenya, while its Kenyan imports amounted to MAD 99.04 million at the end of 2017.

Agriculture, pharmaceuticals, electronics, and engineering and construction are Morocco’s largest exports to Kenya. 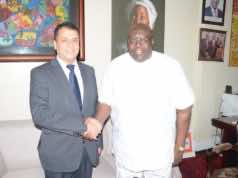