With world leaders gathering in Buenos Aires for the G20 Summit, all eyes will be trained on their interactions with MBS. 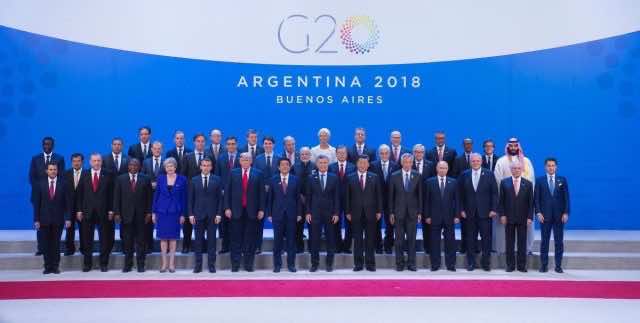 The world’s 20 most economically powerful states will discuss the global economy, climate, and energy reforms today in Buenos Aires, Argentina.

Saudi Crown Prince Mohammed bin Salman (MBS) has been under an international spotlight since the killing of journalist Jamal Khashoggi in the Saudi consulate in Istanbul on October 2.

The Khashoggi killing was a turning point for many of Saudi Arabia’s allies, with the exception of the United States, which has ruled out suspending arms sales to the Gulf state.

The Saudi coalition in Yemen, which the US supports, is also widely opposed by members of the G20. The international summit is speculated to open dialogue among world leaders on the humanitarian crisis.

UK Prime Minister Theresa May has vowed to address MBS at the conference to discuss Saudi Arabia’s involvement in Yemen and Khashoggi’s murder.

In a news conference, French President Emmanuel Macron stated, “I’ve always been very clear about the issue of Saudi Arabia and I will inevitably have the opportunity to discuss it with the Saudi crown prince on the sidelines of the G20.”

Mohammed bin Salman’s presence at the international summit comes at a time where world leaders are faced with the dilemma of either alienating strategic and economic interests with Saudi Arabia or neglecting international human rights standards by maintaining close relations with the crown prince.

On his way to the G20 Summit, MBS made a regional tour of the Middle East and North Africa. Tunisian protesters met MBS angrily in Tunis, but after King Mohammed VI refused to meet MBS in Rabat, the crown prince chose not to visit Morocco.