A Moroccan immigrant intervened heroically to save an Italian doctor from a murder attempt.

Rabat – On Tuesday, December 4, in the Italian city of Crotone, Luigi Amoruso, 50, attacked and stabbed 56-year-old doctor Maria Carmela Calindro in front of the San Giovanni di Dio Hospital because he believed she was responsible for the death of this mother.

Fortunately, a nearby street vendor disarmed and disabled the aggressor, according to Italian news agency Ansa. The hero was later identified as Mustafa El Aoudi, a Moroccan immigrant and father of three who lives on the outskirts of Crotone.

A two-minute video shows police arriving at the scene and Mustafa El Aoudi giving his statements.

Read Also: Moroccans among Highest Numbers of Legal Immigrants to France for Jobs

“I heard the doctor scream and then I approached. I noticed that the man hit her with a screwdriver with the aim to kill her. I came closer and threw him down, then he ran away and I chased him to the trash can. I tripped him and he fell. At that point I disabled and held him until the police arrived,” El Aoudi said.

Police and the doctor’s colleague praised his heroic actions. Mustafa El Aoudi modestly responded saying, “I did what everyone would do.”

According to Ansa, the incident was the second serious attack on a doctor practicing at the civil hospital in Crotone over a four month period. 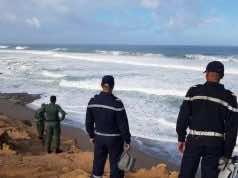