Ranked the 6th heavyweight in the world by Combat Press, Jamal Ben Saddik knocked out his Romanian rival and took home $150,000.

The kickboxing match took place Saturday in Rotterdam, Netherlands. Ben Saddik dominated the first round despite the injury he sustained to his right hand in the first minute of the match.

Ben Saddik, nicknamed the Goliath, continued to fight using only one hand and managed to knock out his rival 70 seconds before the end of the first round. The win earned Ben Saddik $150,000.

By taking down the second best kickboxer in the world, the Goliath is now the favorite to take on the number one contender in kickboxing, Rico Verhoeven.

The Moroccan fighter already faced the current Glory Heavyweight Champion in April 2018. Ben Saddik lost by knockout during the fifth round following a series of punches.

In the rankings, Rico Verhoeven is first and Benjamin Adegbuyi and Mladen Brestovac are second and third, respectively. Roman Kryklia is ranked fourth, while the Moroccans, Badr Hari and Jamal Ben Saddik, are fifth and sixth, respectively. 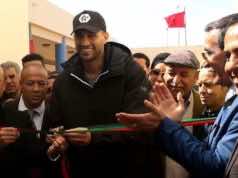