Rabat – Angry students are hoping today will go down as “Mardi Noir,” or Black Tuesday. The planned protests will add to the damage already occurring.

Students are angry at President Macron due to two controversial pieces of legislation he plans to introduce. He plans on changing the current end-of-term exam from broad subject choices to narrower course-specific exams, reports France24. He also wants to introduce stricter entrance requirements to French universities.

Students claim the law will increase inequality between wealthier schools and more economically challenged ones. Following protests throughout the country, one of the leaders of a French student union said students planned on demonstrating “until our demands are met.”

The French government has not faced a student-worker protest movement since the May 1968 demonstrations paralyzed the country.

Read Also: France: Professor at University Refuses to Teach Because of Hijabi Students

The protesters earned the nickname “Children of the Yellow Vests” from observers in the country. In a France 24 interview, a researcher states, “If the student movement has taken hold it is in part thanks to the Yellow Vests.”

Protesters have clogged French roads and vandalized buildings for nearly a month. The protesters, initially outraged at a proposed tax on gasoline, also attacked tax hikes on pensions, the stagnant economy, and several other issues.

Macron has attempted to quell protesters in several ways over the past few weeks. He discredited the protests as unnecessary acts of violence and asked for calm. He also promised to cancel the planned “green tax” in addition to planned tax increases on parts of the working and middle classes. However, he refused to increase taxes on businesses as well, claiming it “would weaken us, we need to create jobs.”

French officials estimate that the protests will affect approximately 450 schools, according to the Local. As disgruntled students take to the streets alongside enraged workers, Macron is facing the French government’s worst nightmare. 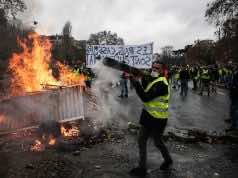