The suspect in the Strasbourg Christmas market attack was already known to French intelligence services as a terror threat.

Rabat – A man who attacked Strasbourg’s Christmas market is on the run after he opened fire and “spread terror” Tuesday evening, in the words of French interior minister Christophe Castaner.

On Wednesday, police made an initial announcement that three people were dead and 13 injured after the attack. However, the toll was later revised to two dead and 14 injured, nine of them seriously.

Castaner identified the shooter, who was already known to law enforcement. The prefecture of Bas-Rhin indicated that the suspect was registered as “S,” short for “State security.”

According to the Guardian, French police had already tried to arrest the suspect earlier Tuesday for armed robbery.

German police said the suspect was in prison in Germany in 2016 and 2017 for theft and then deported to France.

The French intelligence services knew the suspect, who was born in Strasbourg in February 1989, as a potential security risk.

The French interior minister said, “The government has decided to move the security level to the emergency attack level with stricter border controls and increased controls at all Christmas markets in France to avoid the risk of copycat attacks.”

The French military spokesman, Colonel Patrik Steiger, said that the shooter did not seem to be targeting soldiers patrolling in and around the market, but rather civilians.

Soldiers guarding the Christmas market shot the suspect. Not fatally wounded, he escaped in a taxi, said BFM TV.

No one immediately claimed responsibility, but the US-based Site Intelligence Group, which monitors radical websites, said that ISIS supporters were celebrating. 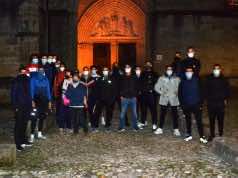 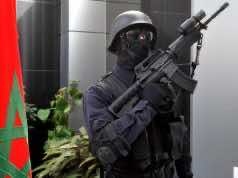