Morocco’s security services denied allegations that police arrested French protesters on the sidelines of the intergovernmental conference for migration in Marrakech. 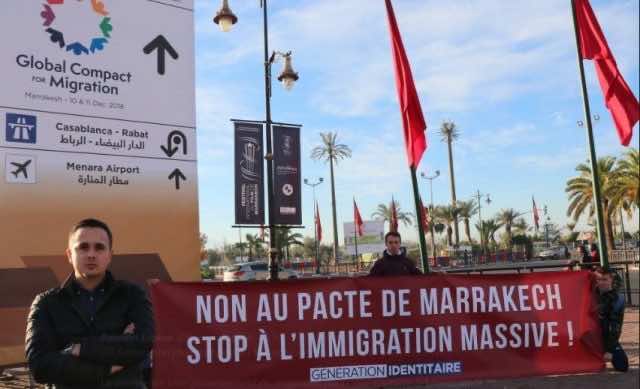 Rabat – The General Directorate of National Security (DGSN) denied rumors circulating on social media and local news outlets that allege its members arrested  French activists who were protesting the adoption of the Global Compact for Safe, Orderly and Regular Migration.

The DGSN’s statement , which was quoted by Moroccan television channel 2M, said that its members  “[had] not initiated or restricted any freedom of movement against any foreign or Moroccan citizen in the city of Marrakech.”

The French activists  are members of Identity Generation, a movement that is known for its hostility and racism toward migrants. During the conference, they carried a banner that read: “No to the compact of Marrakech. Stop the massive immigration.”

The political movement originated in France  in 2012 “to fight massive immigration to and the Islamization of Europe.” It also has branches in the Netherlands, Germany, and Belgium.

On Saturday, December 8, French yellow vests protested the Marrakech compact on the sidelines of their protests against Macron’s government.

A Twitter user shared the video of the protest against the UN migration pact, which was captioned: “In Lyon, the yellow vests are mobilized against Marrakech’s pact.”

On Monday, more than 160 countries voted in favor of the compact today.