A Moroccan delegation has signed a partnership agreement with Mauritania to cooperate and exchange expertise in the fields of hydrocarbons and mines.

Rabat – Morocco and Mauritania signed a partnership agreement in the fields of hydrocarbons and mines, on Wednesday in Nouakchott.

The convention aims to strengthen the exchange of expertise, training and know-how in the field of hydrocarbons between the two countries, said Benkhadra in a statement to Maghreb Arab Press (MAP).

Benkhadra added that Morocco and Mauritinia signed the convention on the sidelines of the 5th Mauritanides conference-exhibition of the oil and mining sector in Mauritania, which is being held in Nouakchott, December 11-13.

A Moroccan delegation led by the Minister of Energy, Mines and Sustainable Development, Aziz Rabbah is participating in the conference.

ONHYM’s director also said that the conference is a great opportunity to make contacts with various companies in the fields of hydrocarbons and mines, and with Mauritanian officials.

Benkhadra stressed that “this is an opportunity for us to discuss with our Mauritanian counterparts in order to reinforce the cooperation that is already of a high quality between our two bodies (ONHYM and SMHPM) and to consider the various ways of evolution of this partnership.”

She also added that the conference is of great importance because it is being held at a time when Mauritania intends to develop its sector and is also an opportunity to promote Moroccan potentialities and to exchange with industry operators on collaboration opportunities between the different parties.

The conference is attended by 1500 people, including 100 exhibitors, and the organization of 70 conferences presented by 30 countries.

A large Moroccan delegation of operators led by president of the General Confederation of Enterprises in Morocco (CGEM), Salaheddine Mezouar, will visit Mauritania to take part of the Morocco-Mauritania Economic Forum.

Scheduled for December 16-18, the economic forum will explore business and investment opportunities and boost trade links between the private sectors of the two countries. 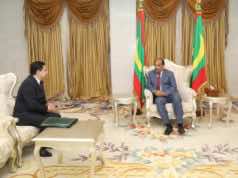