Making the French language universal has been among France’s Macron’s top priorities. 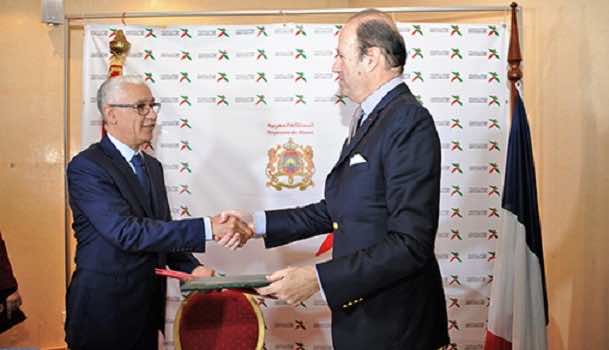 Rabat – France and Morocco have signed a French-learning agreement to revitalize French in Morocco.

Signing the document in Rabat yesterday, Rachid Talbi El Alami, Morocco’s youth and sports minister, and Jean-François Girault, the French ambassador to Rabat, said that the document is a positive step towards the strengthening of the cultural and linguistic proximity between Rabat and Paris.

According to the two officials, the recently signed document follows in the footsteps of a 2017 agreement between France and Morocco to revive the French language’s appeal and reclaim the prestige it has lost in recent decades in a number of predominantly Francophone countries.

The document being signed is “validation of the initial tentative settlement,” said El Alami, in reference to the 2017 agreement between the two partners.

However, the Moroccan official added, what is new in the newly signed accord is that it will enlarge the inroad of French language into Moroccan schools and cultural centers.

In the frame of the agreement, Morocco’s youth and sports ministry and French authorities will cooperate to build French language learning centers in youth cultural centers (Maison des Jeunes) around Morocco.

“The project entails the building of French language centers in all Moroccan youth cultural centers,” said the Moroccan minister. He added that the project will be monitored by his ministry “in collaboration with the French Institute in Morocco.”

While strengthening the linguistic bonds of the Rabat-Paris rapprochement, the agreement will also help young Moroccans wishing to master the French language. For the French ambassador, despite recent setbacks, his country’s language remains an important international language to have in one’s linguistic toolkit.

He expressed his desire to have more Moroccans learn French and be interested in French culture. He said: “The francophone area is open to French, Moroccan, African, and European youth. Girault explained that learning French can open many doors, especially in terms of professional career.

During the signing ceremony, 42 children from youth centers in Kbibat, Al Amal, and Mechouar received their “French as a foreign language” certificates.

Read Also: Protesters in France Unwilling to Hang Up Their Yellow Vests

The agreement comes in a politically charged moment for France and the French language. In 2017, President Macron launched an initiative to make France a global language.

The French president appointed Morocco’s Leila Slimani as his francophone affairs councilor. Macron argued that former French colonies, which now make up the majority of the International Organization of Francophonie, are the sole recourse if France wants to reclaim its lost cultural and linguistic global prestige.

In recent months, however, the French government passed a controversial bill on university fees for foreign students.

According to the new bill, non-EU students, who, like their French and EU counterparts used to receive free-of-charge education, will now have to pay 30 percent of the total cost of their university degrees. The new regulation will enter into force starting in the 2019-2020 academic year.

Ever since, many in France have voiced concerns about the future of French and Francophonie, saying that rather than make France attractive, the new regulation will make students choose countries like Canada, the US, or England over France.

Others have suggested that the historical and cultural proximity between France and former colonies will be a basis to exempt francophone students from paying the new fees.

But it remains to be seen whether France is taking the complaints into account and whether the document signed yesterday is part of more agreements to come.