South Korean prime minister will visit Morocco and two other countries in North Africa in a seven-day trip to boost economic cooperation.

In a two-day visit to Morocco, the South Korean prime minister will meet with Morocco’s Head of Government Saad Eddine El Othmani.

Lee will meet his Algerian counterpart Algeria Ahmed Ouyahia to discuss ways to boost economic partnerships between the two countries, especially in construction and infrastructure projects.

During his trip to Tunisia, Lee will meet Tunisian President Beji Caid Essebsi and other government officials.

Given the three nation’s strategic location linking Europe, Africa, and the Middle East, the Korean prime minister seeks to deepen economic ties with the North African countries and promote investment for his country’s business companies.

In the May meeting, both Lee and El Othmani discussed the bilateral cooperation that has united the two countries since diplomatic relations opened in 1962.

El Othmani led a delegation which included a number of ministers. 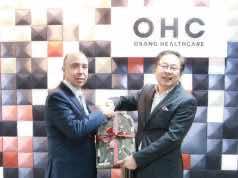