Morocco has been touted one of the countries least affected by terrorism, but a recent murder may challenge that reputation, alerting the country to the constant danger of extremism.

Rabat – On Monday this week, Moroccan police discovered the bodies of two Scandinavian tourists. Louisa Vesterager Jespersen, 24, from Denmark and Maren Ueland, 28, from Norway arrived in Morocco on December 9 for a month-long holiday, according to a local in Imlil, one of Morocco’s scenic Atlas Mountain areas.

Louisa and Maren were friends from the University of South-Eastern Norway, where they both pursued bachelors in outdoor life, culture, and ecophilosophy.

“The two girls arrived on December 12 and got in touch with the local guides’ office on the same day. But they declined our requests to be accompanied by one of our guides,” a local official said after news emerged of the killings.

The first few hours following news of the murders on Monday, December 17, abounded in speculations as the Moroccan authorities and their Danish counterparts tried to find leads and investigate the circumstances of the murder. The cooperation proved effective, as Morocco arrested one suspect just a day after the murder.

For Imlil residents, the “barbarous and heinous” act was not reflective of their village’s reputation for “serenity,” “tolerance,” and “peaceful cohabitation.”

Tourists who have visited Imlil agreed en masse on social media. There were scores of testimonies that the people of Imlil are “peace-loving” and “open-minded.”

But the murder also sparked anger and frustration.

“We advised her [not] to go down because it’s such a chaotic place, and you’ve heard of people who have been killed down there,” Helle Jespersen, Louisa’s mother, said in the first interview she gave to Danish outlets after learning about her daughter’s death. She added, speaking of Moroccan authorities: “I really want them to catch the guilty people, but I just think the chances are very small in such a country.”

Many Moroccans replied that they, too, felt greatly affected by the unfortunate occurrence; the tragedy had shaken them at their core as well.

“This has nothing to do with who we are or what we stand for,” Imlil residents said en masse, according to Medias 24’s on-site coverage.

The sentiment found resounding echoes among tourists who are familiar with the region, having holidayed there. “This won’t tarnish my love for Morocco…. It could have happened in Norway,” a former visitor told Morocco World News.

Moroccans felt compelled to not only empathize and sympathize with the victims’ families, but they also offered their “heartfelt” and “sincerest condolences” on behalf of “our country.”

Shaken in their sense of country, which has a reputation of being based on “tolerant Islam,” generosity, and hospitality, Moroccans abroad, particularly in Denmark, and those in the country took to social media to say they were “sorry.”

Thousands commented on Louisa’s final Facebook post in which she announced her scheduled trip to Morocco and asked for recommendations about Mount Toubkal.

“Rest in peace. We are sorry,” hordes of Moroccans commented on the post in a particular outpouring of condolences and reassurance for prospective tourists.

Tourism accounts for 10 percent of Morocco’s national income. And for Imlil, which annually receives as many as 20,000 tourists, the sector is the undisputed lifeblood of the local economy.

“This incident was like a stabbing in the back,” a local resident said, hinting at the fear locals felt when coordinated investigations into the murder later revealed terrorist links. “Terrorism is something new here. We are not used to it. This is the first time,” he asserted.

Although BCIJ, Morocco’s elite police, arrested the remaining three suspects Thursday as they tried to flee Marrakech by bus to Agadir, another tourism hub, fear has spread as a country that has kept terrorism at bay since 2011 is hit in the most unexpected manner.

Morocco is being targeted because of its impeccable success in fighting terrorism, Moroccan security analysts and scholars repeated in chorus as Moroccan and Danish intelligence services authenticated a graphic video that had grabbed headlines in international media.

The video of suspects pledging allegiance to ISIS, which was later revealed by authorities to have been filmed a week prior to the incident, shattered the doubts of those who may have been thinking that terrorism was not the motive behind the murders.

For years, Morocco has worn its unique anti-terrorism success story like a badge of honor. Morocco’s BCIJ has grabbed international headlines on many occasions as the MENA region’s grand outlier in terms of security. Some witty reporters described Abdellatif Hammouchi, the mastermind of Morocco’s anti-terrorism system, as “the super agent who never sleeps.”

“If the Islamic State is able to strike within the borders of a state whose defense is viewed to be exceptional, such an attack may carry significant symbolic value—and such symbolism could have dangerous ripple effects,” a 2017 study had warned. It stressed ISIS’s insistence on targeting Morocco despite its repeated failures.

Norwegian police have said that they have no reason not to believe that a decapitation video was not of the murders. In the video, one man is heard saying, “This is revenge for our brothers in Hajin,” a reference to a village in eastern Syria, a former ISIS stronghold which the US-led coalition recently assaulted.

An earlier video, shot last week and posted online on Thursday, is believed to show the four suspects pledging allegiance to ISIS.

News of an ISIS-linked crime could damage one of Moroccan tourism’s biggest selling-points: Security.

By finding a crack in Morocco’s hitherto impenetrable anti-terrorism citadel, extremists will take pride in this hugely “symbolic victory,” discouraging some prospective tourists from coming to Morocco.

As authorities revealed more and more information on December 20, the government condemned the killings and promised to be far more vigilant in the future. Alert and shaken, Morocco’s government spokesman, Mustapha El Khalfi described the double murder as a “criminal and terrorist act,” promising that the country would double its security measures to prevent a repeat.

Meanwhile, authorities in Oslo and Copenhagen chimed in. The two governments issued statements condemning terrorism and promising to stand by Rabat to combat extremism.

Denmark’s Prime Minister Lars Lokke Rasmussen, said: “There are still dark forces that want to fight our values.” But, he added, “We must not give in.”

While the Imlil tragedy dealt a blow to Morocco’s reputation for security, it seems—judging from the avalanche of sympathetic comments on social media—to have awakened people to our shared humanity and the spirit of resilience when facing an act as criminal and as indefensible as the Imlil killings.

As fears of terrorism mount, international solidarity seems to be prevailing. On December 19, Glen Martin, the former boyfriend of Louisa, took to his Facebook account to call for peace, love, and positive energy.

“I want to finish off with a request to us left behind. Love will bring us through this, not hate; hate gives us nothing but anger. Love Louisa and her memory … I want everybody that reads this post to call or text someone close to you and tell them how much they mean for you.” 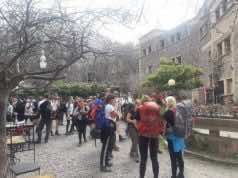