A couscous war is stirring between Morocco and Algeria.

By
Ahlam Ben Saga
-
Ahlam Ben Saga is a Cultural Studies graduate from university Mohammed V of Literature and Humanities in Rabat.
Dec 28, 2018
Spread the love

At the press conference following the weekly government council on Thursday, El Khalfi stated “no one can deny” the origins of the dish, implying that couscous is Moroccan through and through.

Ouyahia continued: “We have to prove them wrong. We are not saying that couscous is Algerian but Maghrebi. We have to promote Algerian couscous though.”

Couscous is integral to the cultural heritage of multiple Maghreb countries, especially Morocco, Tunisia, and Algeria.

The couscous war, however, is not limited to Maghreb countries. Last February, things escalated when Palestinians and Israelis debated the origins of a couscous salad.

It started when a Virgin Atlantic flight offered “Palestinian couscous salad” on their menu, displeasing one Israeli customer, who went as far as calling for a boycott against the airline.

The airline described the dish called “maftoul” as: “Palestinian couscous salad inspired by the flavors of Palestine.”

Ranting online, the Israeli passenger wrote: “I thought this was an Israeli salad…obviously [Virgin Group founder Richard] Branson showing his true colors…Israelis must boycott Virgin and Israel must ask for an explanation. When I complained the stewardess tried to take back the menu from me.”

After the airline changed the name of the dish, omitting the word “Palestinian,” supporters of the Palestinian cause took to Twitter to express their displeasure.

Couscous is a North African dish typically made with grains of crushed durum wheat, vegetables, and meat.

On Tuesday, Algeria announced that on behalf of the Maghreb countries, it will submit a proposal to list couscous in UNESCO’s World Intangible Heritage List next March.

El Khalfi: UN Roundtable in Geneva is Not for Negotiations 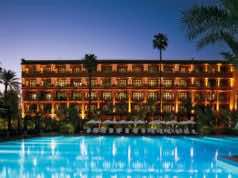