After a warning about fake olive oil, Morocco’s sanitary office called on citizens to check olive oil labels and nutrition information before buying.

Rabat – Morocco’s National Office of Food Safety (ONSSA) has published new statistics, showing that 67 percent of Moroccans do not check for a label on the olive oil they buy.

Only 33 percent of those surveyed said that they check for nutrition information and labels on olive oil before purchasing.

The post followed a campaign by Morocco’s Ministry of the Interior, which deployed a special patrol unit to combat vendors selling fake olive oil across Morocco.

The minister added that Morocco had harvested 2 million tons of olives in 2018. The number represents an increase of 28 percent compared to last year.

Morocco became the 4th largest olive producer across the world in 2018.

Olive trees cover more than 1.07 million hectares in Morocco, accounting for 65 percent of the tree species in the country. The olive sector is a major employment source, providing 380,000 jobs. Women make up 20 percent of the workers in the sector.

The sector also helps the trade balance in Morocco by ensuring the inflow of foreign currency, estimated at MAD 1.8 billion annually.

In addition to olive oil, ONSSA also posted about honey, saying that honey products should be labeled throughout all steps of its marketing. 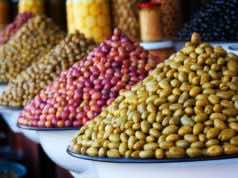