At least six people have died and 16 were injured in a deadly train accident on the Great Belt bridge in Denmark following a severe storm.

Rabat – On Wednesday morning, the passenger train was hit by flying objects from a freight train carrying beer and traveling in the opposite direction on the bridge linking Denmark’s main islands, Zealand and Fyn.

According to local authorities, the Copenhagen-bound train was carrying 131 passengers and three crew members on board.

A heavy storm also made it difficult for emergency services to reach the train.

Danish authorities closed the 18-kilometer bridge which is part of the infrastructure that links Denmark and Sweden to Germany.

Morocco suffered a deadly train accident in October. An ONCF train derailed near Bouknadel between Rabat and Kenitra, killing seven people and injuring as many as 125. 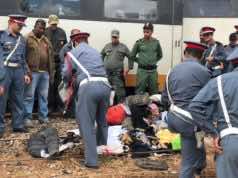 Timeline of Major Train Accidents in Morocco Since 1993