Rabat – The UK has said Syrian President Bashar al-Assad is not leaving the presidency any time soon and that Moscow is responsible.

“Regretfully, we do think he is going to be around for a while,” British Foreign Secretary Jeremy Hunt told Sky News Thursday. “That is because of the support [Assad] has had from Russia. Russia … gained a sphere of influence [and] a responsibility.”

Hunt’s comments signal a change in policy from his predecessor, Boris Johnson, who said a year ago that President Assad should only remain in power if re-elected after a peace agreement. Assad has regained control of most of the country with the support of Russia, Iran, and armed groups such as Hezbollah.

Last week, the UAE reopened its embassy in Damascus. In December, Sudanese President Omar al-Bashir became the first Arab leader to visit post-war Syria. Mauritanian President Mohamed Ould Abdel Aziz will travel to Syria at the end of next week to meet with President Assad.

Morocco has regularized Syrian refugees in Morocco and in 2012 set up a field hospital in the Zaatari refugee camp in Jordan. Morocco remained neutral in regard to Russia’s involvement in the Syrian crisis while supporting an undivided Syria. 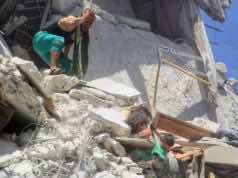