By
Tarek Bazza
-
Tarek Bazza is a journalist at Morocco World News with Master’s degree in Translation from King Fahd School of Translation in Tangier.
Jan 5, 2019
Spread the love

During the most recent episode of his show “Al Jumua Talk” on Youtube, Kettani criticized 2M, saying: that channel had invited a “ridiculous” comedian who used “degrading and insulting” words against Imam Ayyad.

The comedian used Qadi Ayyad’s name as the punchline for a joke that associated “Qadi” with “excrement,” saying: “At home you have a bathroom that has a small library inside. You read Qadi Ayyad’s book and you are done defecating.”

Born in Ceuta in 1083 under the Almoravid dynasty, Qadi Ayyad was the scion of a notable scholarly family. Ayyad became a prestigious scholar and great Imam of Ceuta and then a magistrate in the Emirate of Granada.

Sheikh Kettani excused the comedian, citing the fact that he might not have been familiar with Ayyad. However, Kettani stressed that 2M, “which gets paid from the public money,” did not accidentally show the scene.

The channel “is used to degrading sacred Islam,” including disrespecting the status of the Prophet Muhammad and Islamist scholars, he said.

After citing some of Ayyad’s works, Kettani called for respecting scholars and stressed that Moroccans should show indignation over the comedian making a mockery of Ayyad.

He also called on Ulama councils’ scholars and intellectuals to condemn and raise voices against this act.

Ayyad served as a judge in Ceuta between 1121 and 1136. He lost a revolt that he headed against the coming of the Almohades to Ceuta. Ayyad was then exiled to Tadla in central Morocco and later to Marrakech, where he died in 1149.

Morocco’s Cadi Ayyad University in Marrakech was named after Qadi Ayyad. He is also known as one of the “seven saints of Marrakech.”

Seikh Kettani was a former political prisoner. In September 2003, he was sentenced to 20 years in prison for alleged connections to the Casablanca bombings in 2003. Eight years later, Kettani was granted a royal pardon due to efforts by his lawyer, Mustapha Ramid, who later became Morocco’s Minister of Justice.

Since his release, Kettani has denounced extremism and encouraged its rejection. 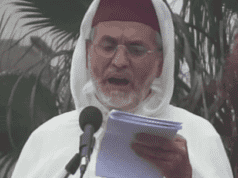