King Muhammad V of Malaysia decided to abdicate the throne weeks after announcing his marriage to Miss Moscow 2015.

Rabat – International media reported that Malaysia Sultan Muhammad V announced his intention to abdicate the throne, a decision unprecedented in the country’s history.

The Malaysian palace confirmed the decision, but has yet to issue a statement explaining the King’s reason.

The 49-year-old sultan held the throne for two years and had another 3 years left to reign before the throne rotated. The country’s rulers are expected  meet to decide on the next leader.

In December 2018, photos of the Malaysian King marrying Miss Moscow 2015, Oksana Voevodina, went viral. The wedding was reportedly held at a concert hall in Barvikha, a village in Moscow.

The wedding reportedly did not serve alcohol and all food was halal, cooked according to Islamic law.

The 25-year-old wife of the resigned king converted to Islam in April 2018. In a photo posted to Twitter last year, Voevodina posed in a hijab with her husband.

Despite the release of photos of the sultan’s marriage to  Miss Moscow 2015, to international news outlets, including The National, many are still calling the marriage a rumor because royal officials have not released a statement confirming the marriage. 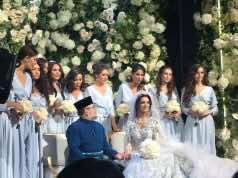