Morocco is one of 21 countries competing in the World Pastry Cup and one of 24 in the Bocuse d’Or in France.

Ait Ouakrim, the Moroccan head chef at the luxurious “Palais Soleiman” restaurant in Marrakech will participate in both competitions under the guidance of Moroccan chef and jury member Kamal Rahal Essoulami.

Ait Ouakrim has worked with several major hotels in Morocco, such as Cesar hotel, Kenzi hotel, and La Sultana hotel in Marrakech, and L’Amiral Restaurant in France.

In its 2019 event, Sirha will hold a two-day competition January 27-30 at the Eurexpo convention center and exhibition hall in Lyon, France.

Chefs from 24 countries will participate in the finals of the Bocuse d’Or competition, which will celebrate its 30th anniversary, and bakers representing 21 countries will compete in the World Pastry Cup.

The event will welcome 200,000 professionals from the catering and hospitality industry and host around 3,000 gastronomic exhibitions.

“We are pleased to see the strong increase in the number of international exhibitors who will be exhibiting in January, they will actually make up a quarter of all the exhibitors at the show,” said Marie Odile Fondeur, Sirha’s managing director.

Another Maghreb country, Tunisia, is also participating in the competition to win the golden trophy. In Sirha’s 16th competition in 2017, the French team won the World Pastry Cup and the American team won the Bocuse d’Or. The contestants will perform live to show their culinary skills. Held every two years, the competition was created in 1987.

“Sirha, International Hotel, Catering and Food Trade Exhibition, brings together all the players of the foodservice industry and introduces new products and latest trends around the world.” 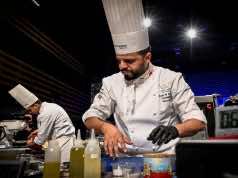