Abou Fares, a taekwondo artist, won the Arab Athlete of Distinguished Athletic Achievements award. Abou Fares was the first Arab to win a gold medal in taekwondo at a youth Olympics event when she won gold in the 2018 Youth Olympic Games in Argentina.

Lafdini, who tied for second place at the 2017 World Para-Taekwondo Championships in London, and Emirati Ahmed Mubarak Almutaiwei, who has won 6 gold and silver medals in international cycling tournaments, shared the Special Needs Persons award.

A total of 353 candidates competed in the 10th Mohammed Bin Rashid Al Maktoum Creative Sports Awards, compared to 297 in 2017. 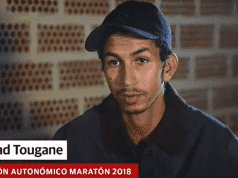