From the €140 million fund, Morocco will receive the remaining €110 million granted by the EU to help tackle irregular migration.

Rabat – The European Union High Representative for Foreign Policy Federica Mogherini announced that Morocco will soon receive €110 million, the remainder of the €140 million fund that the EU allocated for Morocco to tackle irregular migration and to improve the management of EU-Moroccan borders in December.

According to Deutsche Welle, Bourita said that the EU’s financial support is “part of a global Moroccan strategy, including the fight against irregular migration.”

Mogherini announced, “The EU is ready to support the kingdom, especially in terms of national security.”

The EU official also praised Morocco’s efforts against irregular migration, saying that more discussions should be had to allow the EU to benefit from Morocco’s expertise and experience in the field.

The Moroccan government came under pressure throughout 2018 due to irregular migration. Morocco called for more aid from the EU, and Spain supported the request in the EU parliament.

In December, the European Commission pledged €148 million to financially assist Morocco on the migration front, saying it was  “intensifying its support to Morocco to address irregular migration in response to increased migratory pressure along the Western Mediterranean Route.”.

According to the  National Observatory of Migration,  Moroccan authorities thwarted 88,761 irregular migration attempts in 2018. Nearly 80 percent of the migrants (70,571) were not Moroccan. 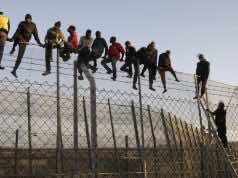 Morocco Thwarts 40,300 Irregular Migration in First Half of 2019