The leader of Italy’s anti-establishment Five Star Movement has called on the EU to punish “countries like France” for their responsibility in Europe’s migration problems.

Rabat – Luigi Di Maio, Italy’s minister of economic development said at a meeting on Saturday in central Italy that France’s policies in its former African colonies are part of the reasons for Europe’s continued migration problems.

According to the Italian official, Africa’s “decolonization” has not totally happened because France has not left its African colonies. Paris’ policies continue to have a considerable impact on African politics. He said France’s presence in Africa is “impoverishing” the continent, escalating Europe’s migration problems in the process.

“If we have people who are leaving Africa now it’s because some European countries, and France in particular, have never stopped colonizing Africa,” Di Maio said.

He added, “The EU should sanction all those countries like France that are impoverishing African countries and are causing those people to leave.”

Reaffirming Italy’s anti-migration stance with a seemingly benevolent spirit, he argued that “Africans’ place is in Africa, not in the depths of the Mediterranean.”

Alluding to “Franc CFA,” the common currency in most of France’s former colonies in West and Central Africa currently facing waves of protests across the continent, Di Maio said that France “continues to print colonial currency that helps finance France’s public debt.” He argued the currency deepens Francophone Africa’s poverty and dependency on France.

The Italian minister further argued that France owes Africa its current status on the global stage. “If France didn’t have its African colonies, because that’s what they should be called, it would be [only] the 15th largest world economy. Instead, it’s among the first, exactly because of what it is doing in Africa.”

Despite the anti-migration undertone of Di Maio’s statements, a slightly different version of his arguments has been made by pro-migration politicians both in Africa and Europe.

Recently speaking in Vienna, where he represented Africa at the Euro-African summit, Rwandan President Paul Kagame said that Europe’s “failed policies” are responsible for the wave of Africans leaving their home countries. Kagame said, “Europe has a migration problem because it failed to address the issue early. Instead of helping Africa, it further impoverished the continent.”

But the Italian’s comments did not sit well with the French government, which was quick to paint them as “aggressive” and “unacceptable.”

“It is not the first time that Italian authorities have made aggressive and unacceptable comments,” the newspaper quoted a French diplomatic source as saying.

Meanwhile, echoing President Kagame’s Vienna interview, Di Maio doubled down on his stance. He said Europeans are “hypocrites” when it comes to migration. 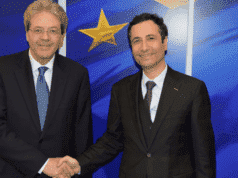