Swiss cigarettes sold in Africa, especially popular in Morocco, are more toxic than those sold in the European Union. The cigarettes Switzerland makes and sells to Morocco are much stronger, more addictive and more toxic than those sold in Switzerland or France, due to the high proportion of nicotine, tar, and carbon monoxide.

The organization Public Eye recently published the results of an exclusive investigation which found that “in 2017, 2,900 tonnes of Swiss cigarettes were exported to Morocco, the equivalent of some 3.625 billion ‘ciggies.’”

According to the investigation, Switzerland produced approximately 34.6 billion cigarettes, or 2 billion packs, of which only 25 percent were sold on the domestic market in 2016.

The Swiss journalists, Marie Maurisse and Gie Goris, who led the investigation analyzed samples of Swiss cigarettes in Morocco and in Europe at the Lausanne Health Institute, a laboratory affiliated with the World Health Organization.

The analysis revealed a double standard and found that “Moroccans smoke cigarettes that are more harmful than those smoked by Europeans. For each substance tested, nearly all cigarettes produced in Switzerland and consumed in Morocco contained levels higher than that found in Swiss and French cigarettes.”

The investigation also reported, shockingly, that “in some cases, the content levels recorded by the Swiss scientists are higher than those stated by the brands on their packaging,” especially for nicotine content. “Winstons contain nearly 1.5 milligrams of nicotine, while the level stated on the packet is 1 milligram.”

Japan Tobacco International, which manufactures Winstons and Camels, related that the results are imprecise and that “all tobacco-related products involve health risks.” The company added, “No one can say that one cigarette is less toxic than another in terms of taste.”

The investigators reported that the manufacturer would not answer why Moroccan cigarettes contain more particles and nicotine than others.

According to “The Tobacco Atlas,” a report by the American Cancer Society, the International Agency for Research on Cancer, and the Union for International Cancer Control, more than 17,600 Moroccans die every year because of “tobacco-caused disease.”

The Moroccan Ministry of Health has previously stated that 13 percent of Moroccan smokers are under 15 years old, and the proportion of women who smoke is about the same as men. 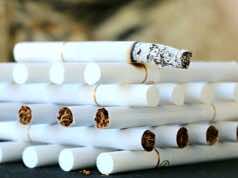