Washington D.C – The United Nations as a whole, and the Security Council in particular, needs to reconsider its approach towards conflict resolution. For many decades, it seems that the UN’s main goal has become not to resolve conflict or find long-lasting political solutions, but merely to bring them under control without any prospects for ending them.

This has been the case for the Western Sahara conflict, as well as for many other conflicts. When we look at the history of the UN, we realize that it has succeeded in bringing peace to very few conflicts.

The main problem that cripples the Security Council is its composition and the irreconcilable positions of its members, especially the permanent members. In each conflict on the Security Council’s agenda, the P5 members tend to stand by their allies rather than try to find a common ground and compromises that could end conflicts.

In recent years, this has been on display regarding the Syrian civil war. While there has been quasi-unanimous support for the departure of Bashar Al-Assad and widespread outrage over the use of chemical weapons against civilians, Russia and China have vetoed eight resolutions calling for the departure of the Syrian President or condemning its use of chemical weapons.

The same can be said to a lesser extent regarding the Western Sahara question. Because each of the P5 countries takes into account its bilateral ties and interests with Morocco and Algeria when considering their positions on the conflict, finding common ground to reach a mutually agreed upon political solution has been elusive so far.

To make things worse, there is a conceptual problem that ties the UN’s hands and prevents it from moving forward. When one analyzes the UN approach towards conflicts on its agenda, it appears that this global body has remained frozen and fixated on the same approaches it followed in the 1960s and 1970s.

The main problem of the United Nations is that it has no creativity or willingness to look for alternatives when the approaches it has tried have proven to be unproductive.

This is the case with the Western Sahara. The UN still clings to the same interpretation of self-determination from the early years of decolonization in the 1960s.

Though the UN has failed over the past 27 years in applying this approach to the Western Sahara conflict, it has still not realized the urgency of moving away from this sacrosanct concept and looking for a more realistic alternative.

In addition, while autonomy is among the three options of self-determination, the UN has been more inclined to interpret self-determination as necessarily meaning the independence of a secessionist entity or separatist movement.

It is high time the UN progresses from its fixation on self-determination and comes to term with the fact that it cannot apply to today’s conflicts the same approaches of the 1960s and 1970s.

The UN cannot keep calling on the parties to work towards a mutually acceptable solution while it maintains the option of self-determination on the table. The UN is fully aware that Morocco will not budge from its position that independence is not an option. This position has been repeated on several occasions by King Mohammed VI and the Moroccan government.

The UN has to be more creative and more realistic and work out a solution that would meet the expectations of all the parties, while maintaining stability and geopolitical balance in the region.

When one compares the language of the last two Security Council resolutions on the conflict with the previous ones, it appears that the UN is moving in this direction.

For the first time since the beginning of the political process in 2007, the Security Council has called on the parties to work towards a “realistic, practicable, and enduring political solution to the question of Western Sahara based on compromise and the importance of aligning the strategic focus of MINURSO and orienting resources of the United Nations to this end.”

Replacing its usual call for the parties to show “realism and compromise” with an emphasis on the need to reach a “realistic” solution is significant and echoes Morocco’s calls on the UN to work towards a viable solution.

This inclusion mirrors Morocco’s emphasis that no political solution can be reached as long as Algeria does not fully partake in the political process. Morocco has made it clear for many years that Algeria is Polisario’s main political, diplomatic, financial, and military backer and without its support, the Polisario would not have lasted.

If the UN Security Council is serious about reaching a realistic and mutually acceptable political solution, the way towards achieving that is by admitting the obvious and including Algeria as a main party to the conflict.

However, the progress achieved in the past two years might be undone by US National Security Advisor John Bolton’s long-held position on the conflict. The American official is known for not holding the UN in high esteem and for favoring a referendum as a way to end the Western Sahara conflict.

He made his views clear in his 2007 memoir. While it seems that a referendum has not been on the table since the beginning of the political process in 2007, the fact that Bolton mentioned it in his address at the Heritage Foundation on December 13, is worrisome for Morocco.

In addition, in the event Bolton clings to his view, his opinion would stand in stark contrast with his stated goal of making the UN peacekeeping mission more effective.

The main reason why the UN has failed to achieve a solution to the conflict is its obstinacy of keeping the referendum as an option. The UN is aware that a referendum is not possible because of Morocco and Polisario’s irreconcilable positions on who is Sahrawi and eligible to take part in a referendum.

Any attempts by Bolton to revive the option of the referendum would be counterproductive and would set back the political process, thus endangering all the efforts the UN has made in the past decades to move towards a more realistic approach.

Self-determination was one of the main principles brandished by Obama’s administration to justify its support for the aspirations of South Sudan’s leaders. American celebrities like George Clooney also used their aura and fame to garner support for South Sudan’s independence.

Yet seven years after its independence, South Sudan has neither provided the dividends of peace and stability to its people, nor become a safe and stable country or a trusted American ally. The country has been mired in civil war for most of its existence, and it has become home to the third largest refugee and humanitarian crisis in the world after Yemen and Afghanistan. More than half of the country’s 12 million people face severe hunger and food insecurity.

Despite all the international efforts to end South Sudan’s civil war, there seems to be no end in sight. Rather than bringing peace, stability, and prosperity to the region, South Sudan’s independence has brought instability, starvation, and bloodshed. In addition, the country has become a burden for the international community and a drain on the UN peacekeeping and humanitarian affairs’ budgets.

Following an attack led by South Sudan’s government forces on Western aid workers, including Americans, in August 2016, the US moved to adopt a Security Council resolution that provided 4,000 more UN helmets to secure the capital.

As recently as December 11, 2018, the UN Office for the Coordination of Humanitarian Affairs appealed to the international community to donate $1.5 billion to provide much needed humanitarian assistance to 5.7 million people.

The South Sudan story should serve as a sober reminder that the principle of self-determination as necessarily leading to independence is neither a panacea nor a one-size-fits-all solution that can apply to all conflicts on the UN agenda, including Western Sahara.

The United Nations and the Trump administration should be clear about the goals they want to achieve in the region. If they want to achieve peace and stability, they should be more creative, more realistic, and work out a mutually acceptable solution that would take into account the interests of all parties.

Any approach differing from the political process initiated in 2007 risks plunging North Africa into chaos, instability, and war, endangering America’s vital strategic interests in the region. 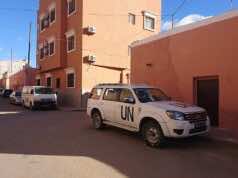