The Muslim Executive of Belgium (EMB) has strongly condemned the Islamophobic attack on a veiled Moroccan Muslim woman in Anderlecht, near Brussels.

Rabat – In a press statement which EMB shared with Morocco World News, the institution expressed immense solidarity with the victim and “strongly” condemned the assault.

“The EMB salutes the lady’s calling on youths to not succumb to the emotions” of helplessness if treated similarly and “to not respond to violence with violence,” EMB wrote.

EMB said that it has faith in the Belgian authorities to bring the assailant to justice and condemns his act of violence.

On December 30, 2018, the Moroccan hijabi woman was walking down a street in Anderlecht with her daughter when a hooded man passed by and punched her in the face.

The incident was caught in the street’s CCTV camera, and the footage went viral on the internet.

The Belgian news outlet La Capitale reported that the victim is a 47-year-old woman named Fatiha, who is calling on Belgian authorities to find her attacker.

While it was not yet confirmed whether the assault was rooted in Islamophobic malice, commenters deemed it “a shameful act of Islamophobia.” Muslims, Activists in France Want to March Against Islamophobia 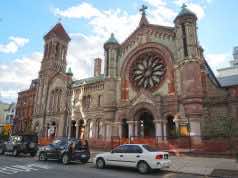