A 34-year-old pregnant woman died on Monday after contracting the H1N1 virus. Doctors performed an emergency caesarean section and delivered the infant, but the baby died one day later.

Rabat  – Both mother and baby boy died in Sheikh Zayed University Hospital in Casablanca, the husband and father, Said, announced.

It is not yet known whether the virus also caused the infant’s death.

At first, the woman had normal flu symptoms, but when she started to cough up blood and underwent medical tests at the hospital, she was diagnosed with H1N1, Said told Moroccan television channel, 2M.

After performing the caesarean section, doctors treated the baby until his death on Tuesday.

Morocco’s Ministry of Health announced in a recent statement that “the appearance of the seasonal influenza H1N1 is common.”

The ministry called on “health sector employees to engage in preventive behaviors, like washing hands regularly, reducing contact with flu patients, covering the mouth when coughing or sneezing with a paper tissue, and not to reuse paper napkins, and ventilating rooms.”

Despite cases of H1N1, the ministry reassured Moroccans that the epidemiological situation is stable.

Reacting to the ministry’ statement, the husband of the H1N1 victim told Moroccan media that “H1N1 exists.” He said the country should make vaccination campaigns to prevent Moroccans from succumbing to the flu.

The mournful man also criticized the “negligence” and belated intervention of doctors to treat his wife. He also condemned the ministry’s initiative to “reassure” people while his son was fighting for life, saying: “I lost my wife because of other people’s mistakes and now I am losing my son.”

As stated by World Health Organization (WHO), “Influenza A (H1N1) is similar to seasonal influenza but has been characterized by higher activity during the northern summer season, higher fatality rates among healthy young adults and higher incidence of viral pneumonia.” 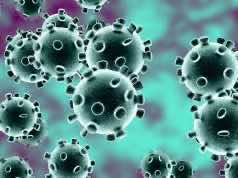