The logo reflects the brand “only,” replied Nike.

Rabat – Thousands of Muslim customers have called on Nike to recall their Air Max sneakers, saying that Nike is insulting Islam by putting the word “Allah” in Arabic on the underside of the shoe.

One customer, Saiqa Noreen, who found the inscription offensive, started an online petition two weeks ago, asking the sports company to remove the new line from stores.

Noreen accused the company of being “disrespectful” of Muslims by putting “the name of God on a shoe.” Over 18,000 people have signed her petition.

A Nike spokesperson told American talk show Today that “Nike respects all religions and we take concerns of this nature seriously.” The spokesperson said that the logo is “a stylized representation of Nike’s Air Max trademark. It is intended to reflect the Air Max brand only. Any other perceived meaning or representation is unintentional.”

Similar cases happened in the past, ranging from perceived connections to intended references.

A few weeks ago, Amazon removed doormats, bath mats, and other goods imprinted with verses from the Qur’an from its site. In 2018, H&M removed a set of children’s socks from its stores after many claimed a jackhammer logo on them imitated the word “Allah.”

In 1997, the Council on American-Islamic Relations criticized Nike for using a flame-shaped logo that resembled the word “Allah” in Arabic. The company apologized and stopped selling shoes with the model. 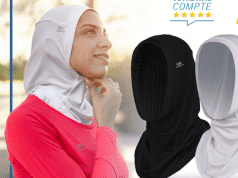 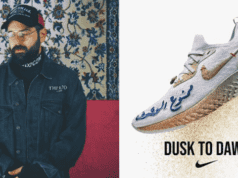