Spain has decided to irrevocably grant its Grand Theater Cervantes, a Tangier landmark, to Morocco.

Rabat – The Spanish government adopted a resolution on Friday during a ministerial council to offer the Gran Teatro Cervantes (Grand Theater Cervantes) to Morocco.

The decision came after Morocco pledged to renovate and manage the theatre and preserve its Spanish identity in exchange for ownership.

The transferring of ownership will take place after the Spanish Parliament’s two chambers, the House of Representatives and the Senate approve the agreement, announced the Spanish government in a statement.

Spain stated that theater is “one of the most prestigious” landmarks in Tangier, emphasizing its architectural and historical value as well as the need to maintain it as a piece of Spanish cultural heritage.

Built in 1913 by a wealthy Spanish merchant, Esperanza Orellana, the theater was considered as one of the most prestigious theaters in North Africa where renowned artists performed. The theatre has a capacity of 1,400 seats.

The Spanish government has owned the theater since 1928. In 2015, Spain announced its intention of offering the theater to Morocco, however, the signing of the agreement between the countries took a long time. 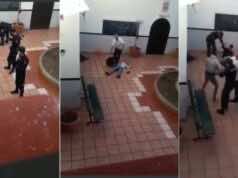