The European Court of Human Rights (ECHR) rejected Said Mansour’s request regarding his deportation from Denmark after being extradited to Morocco.

Rabat – The European Court of Human Rights (ECHR) rejected Mansour’s appeal against his expulsion from Denmark to Morocco for terrorism-related convictions.

A court in Denmark had convicted Mansour of incitement to terrorism for Facebook posts praising Osama bin Laden and encouraging followers to join the al-Nusra Front, an al-Qaeda affiliate in Syria, according to Al Jazeera.

ECHR rejected the appeal based on Morocco’s reassurance that the country would not physically harm, torture, or execute Mansour.

Mansour’s appeal was based on three elements of the ECHR, mainly article 3, which states that “no one shall be subjected to torture or to inhuman or degrading treatment or punishment”.

“The court finds, based on international material, that the human rights situation in Morocco has generally improved over several years, and that authorities are working to comply with international human rights,” the court wrote in its verdict, according to Ritzau’s report.

Saïd Mansour claimed he would be  in danger in Morocco for his critical opinions on King Mohammed VI and the Moroccan government.

Moroccan ambassador to Denmark had previously stated that Mansour is suspected of being part of the 2003 Casablanca bombings in which 45 were killed including 12 terrorists.

He was also found guilty of editing and publishing three books of terrorist propaganda.

Mansour was stripped of his Danish citizenship in 2015. 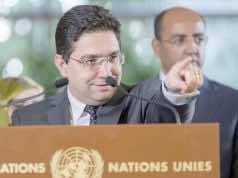 Abu Hamza set for extradition to US