After Moulidia Oujda won the match against Nahdat Berkane, violent riots broke out in the stadium.

Rabat – Violent riots started after the final whistle in a match on Wednesday, February 20, won by Mouloudia Oujda 1-0 at Al-Sharafi Stadium in Oujda, a city in northeastern Morocco on the border with Algeria.

Following the match, part of the 16th round of the national professional football championship, some fans rioted and damaged the stadium. The stadium had only recently been repaired and reopened.

According to some local media reports, four security agents and six fans were injured after the match.

The Central Committee for Discipline and Sportsmanship of the Royal Moroccan Football Federation (FRMF), held a meeting on Thursday morning and issued several disciplinary measures against both teams.

In its press release, the committee stated that it reviewed many reports regarding the violent riots. “These acts negatively impacted sport in general and football in particular, and caused physical and financial losses, which according to preliminary results is 670,000 dirhams.”

The FRMF “denounces these irresponsible actions and affirms that it will not hesitate to make an end to whatever would undermine the national football reputation.”

The committee declared that Mouloudia Oujda would have to play five open games without an audience and pay a fine of MAD 85,000. FRMF also obliged the team to make material compensation quickly, after the stadium management service evaluates the losses.

FRMF also decided to punish Nahdet Barkane, making it play two games without an audience and pay a fine of MAD 10,000.

The committee also called for football fans to combat the phenomenon of rioting and abuses in all its aspects. 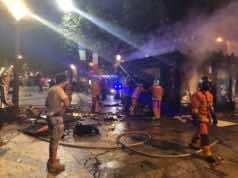