Algerian authorities arrested 41 people amid Friday’s protests in Algeria against Abdelaziz Bouteflika’s campaign for a fifth term in office.

By
Ahlam Ben Saga
-
Ahlam Ben Saga is a Cultural Studies graduate from university Mohammed V of Literature and Humanities in Rabat.
Feb 23, 2019

Rabat – Algerian police have said they arrested 41 protesters objecting to President Abdelaziz Bouteflika’s re-election campaign for “disturbing the public order [and] engaging in acts of vandalism, violence and assault.”

Of the 41 people arrested, 38 were arrested in Algiers, the country’s capital city.

Clashes between demonstrators and Algerian police in protests yesterday afternoon resulted in police’ use of tear gas to disperse crowds and stop them from approaching the presidential residence.

Algerian authorities did not report any injuries on their side or among protesters.

Yesterday, thousands of Algerians took to the streets after Friday prayers to display their rejection of their President Bouteflika’s campaign to win re-election for a fifth term.

The protesters carried banners and chanted hostile slogans to the president like “Bouteflika, the Moroccan, there will be no fifth term,” referring to Bouteflika’s Moroccan birth city, Oujda.

The hashtag #protest_february_22 circulated on social media, encouraging the Algerian people to start a wave of protests against the president’s re-election.

Algeria will hold its presidential elections on April 18.

After he suffered from a stroke in 2013, Bouteflika has rarely been seen in public. 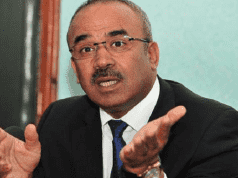 Algerian Prime Minister to Resign to Speed Up Election Process