A few weeks ago, he attracted the attention of the Moroccan public because of his ability to speak English and to program without having learned at school.

Rabat – Eleven-year-old Idder Moutai is fluent in programming languages and has received the respect of the organizers and guests of DevFest, organized by the Google developer group in Agadir at the end of December 2018, surrounded by experts from Google and various countries. He also learned to speak English fluently.

Just a few weeks after the discovery of his talent, Moutai, from Tiznit, a town in the Souss-Massa region 100 kilometers south of Agadir, was mocked for his Darija (Moroccan Arabic) mixed with an Amazigh (Berber) accent in a show on the Moroccan television channel 2M.

Tamazight (Berber) is widely spoken in Tiznit. Some historians say that Tiznit is the cradle of the Sousse dialect, one of the three most popular Tamazight dialects in Morocco.

The child received the sneer campaign with surprise and pain. He said in a post on Facebook: “I don’t know why people say I can’t speak well. I’m not good at Arabic. Don’t make fun of me.”

The child’s uncle, Hassan Moutai, said that the sarcastic comments devastated Idder. In a statement for Maghreb Voices, he said that Idder “grew up in a region where only Amazigh is spoken and the child communicates with his brothers and friends in English and with the rest of his family in Amazigh.”

Dozens of voices of solidarity were raised, condemning the sarcastic comments and describing them as “racist,” stating that “these groups make fun of creative people and celebrate the people who make the buzz.”

Many social network activists have denounced what they have described as the “racist campaign” that Idder faced.

Al Massae journalist Mohamed Ahdad said on Facebook: “Some are so ignorant that they laugh at the accent of a child who has developed a genius in computing.”

“Is it his fault that he did not learn Darija and the Arabic language when, until the beginning of the third millennium, it was a crime to speak his mother tongue in universities and the media?” he added. Only in 2011 did the Moroccan Constitution recognize Tamazight as an official language.

Ahdad continued, “What is Idder’s problem if he speaks Arabic with a Soussi accent; isn’t that the diversity we claim to defend?”

Bloggers also called on Idder to be proud of his Amazigh identity and keep moving forward without paying attention to the negative reactions on social networking sites.

Mohamed El Medlaoui, a professor in linguistics, said that “taking care of children like Maryam Amjoun and Idder Motii is a matter of parental responsibility.” Moroccan 9-year-old Amjoun earned acclaim when she won the 2018 Arabic Reading Challenge in Dubai.

“They are excellent in a given field (mathematics, languages, creative writing, the arts, sport) but do not necessarily have the social intelligence to face the harsh public and the spotlight of contemporary media,” he added.

Activist Wissam Henkari commented on Facebook that Idder was “racially discriminated against on social media. This was only a part of what some members of this company externalize, criticizing everything: initiatives, reforms, and figures.”

The Moroccan Constitution, amended in 2011, describes Tamazight as an official language together with Arabic. In 2017, the government also drafted a law defining the stages of the officialization of Tamazight in the House of Representatives, but it has not made notable progress.

According to the draft law, the state is working to implement several measures to formalize Tamazight gradually over a period of 15 years. 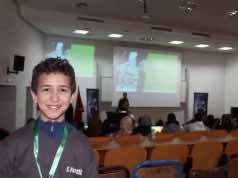