Last month, the interim president addressed a special message to Morocco for being the first Arab and African country to support the Venezuelan people’s aspirations.

Guaido expressed  his gratitude during a meeting with Moroccan ambassador to Brazil Nabil Adghoghi on Thursday.

During the meeting, Guaido recalled that Morocco was the first Arab and African country to provide support for the Venezuelan people’s aspirations for democracy and freedom.

The interim president also renewed his willingness to build  “strong and confident” diplomatic bonds with Morocco.

This is not the first time Guaido has expressed his willingness to restore diplomatic ties with Morocco.

In an interview held in February with Emirati television channel Al Ghad, Guaido addressed a special message to Morocco.

“We thank the Arab world, and Morocco especially, for its supporting position for us,” he said.

Avendano also said that Venezuela will “reconsider its recognition of the Sahrawi Republic” under Guaido.

On January 29, Guaido held a conversation with Morocco’s Minister of Foreign Affairs Nasser Bourita  by telephone, informing him that Morocco supports all the actions Guaido is taking for the legitimate aspirations of the Venezuelan people for democracy and change. 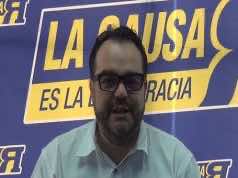