Moroccan chef Faycal Bettioui is the second Moroccan to receive the award.

Rabat – Moroccan Chef Faycal Bettioui has received the world’s most coveted award that every chef aspires to receive, a Michelin Star.

Bettioui received the award at the 2019 Michelin Star Ceremony held in Berlin on Tuesday 26th.

The 36-year-old Moroccan studied computer sciences in the U.S before opting for dentistry. While preparing for his bachelor in Biology at Florida International University in Miami, Bettioui then switched his direction again to pursue his passion for cuisine.

The Moroccan chef earned the award after a long journey of 20 years of practicing his passion by taking the command of two restaurants in Miami, and one in Germany, Zur Krone- one of the most ancient food houses in the city of Neupotz.

Bettioui has been the chef and owner of Zur Krone restaurant since 2015. 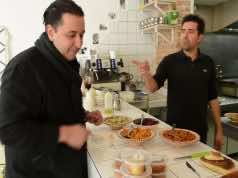