After promising enhancements at the Ceuta border, Spain will increase the height of Melilla’s border fence and install technological equipment to curb the influx of migrants. 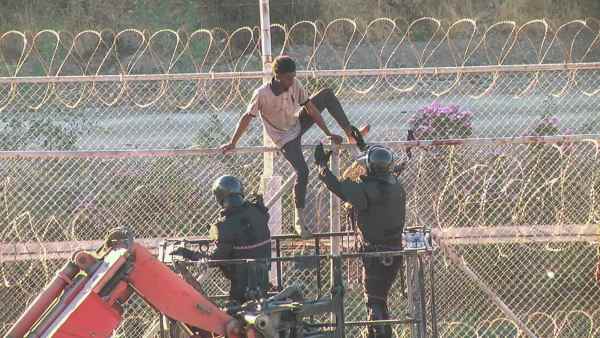 Rabat – Spanish Minister of the Interior Fernando Grande-Marlaska has announced that Spain will remove the third layer of the border wall around the Spanish enclave of Melilla, to make the wall taller and non-injurious.

Marlaska said that, in line with his investigative visit to Melilla, on Saturday, March 2, Spain will keep only two layers of the border wall but will increase the fence’s height from 6 meters to 8 or 10 meters.

The government will remove the barbed wires from the fences and equip the border with CCTV cameras to facilitate its fight against irregular migration.

The Spanish government intends for the border modifications to be secure but not to injure migrants.

The same applies for the Ceuta border. The minister announced on February 23 that “the height of the fence will be increased by 30 percent, reaching ten meters, where most of the entries occurred.”

Construction work at the borders of the Spanish enclaves have yet to start.

According to Marlaska, construction may start in about a month at the Ceuta border.

According to figures presented by the conservative Spanish Popular Party (PP) during a meeting at the Spanish Parliament on February 26, the migration influx into the enclaves is 25 times higher in Ceuta and 50 times higher in Melilla compared to the national average.

PP maintained that the figures weigh on Spain’s ability to care for the migrants, especially in terms of healthcare.

Meanwhile, the Spanish National Institute of Health Management (INGESA) said that 30 percent of births in Ceuta and 60 percent of those in Melilla are children born to Moroccan mothers.

Young Moroccan migrants arriving at the enclaves represent the highest number of those arriving from other MENA countries.

In 2018, almost all of the 3,344 unaccompanied minors from the MENA region who entered the Spanish enclave of Ceuta in northern Morocco were Moroccan, according to official data from Spanish authorities.

Spain is also considering toughening requirements of Spanish citizenship for Moroccans living in Ceuta and Melilla.

The Spanish Parliament approved a draft law last week which dictates that foreigners in the two Spanish enclaves will only obtain citizenship after living there for 10 consecutive years as residents instead of one year.

The bill maintains that children could only be considered Spanish if one of their parents had been born in Spain, reported Spanish news site El Faro de Ceuta.