In 2017, Morocco exported $1.2 billion worth of aeronautical materials and aerospace jobs increased by 50 percent.

Rabat – The French Nexteam Group will start making aluminum and hard metals aeronautical parts at its plant in the city of Mohammedia, near Casablanca.

According to a statement from the group issued on March 1, the plant will cover almost 2,500 square meters.

The company is also planning to employ about 80 people by 2022.

“The new location reflects our desire to always be closer to our customers, some already present in Morocco and to position ourselves as one of the major players in this fast growing sector in the region,” said Nexteam Group President Ludovic Asquini.

According to the statement, the production launch is scheduled for May or June 2019.

Nexteam’s customers include several companies operating in Morocco, including Safran.

Boeing has a joint venture with France’s Safran in Casablanca to build aerospace parts, such as wire bundles and harnesses, for aircraft makers like Boeing and Airbus.

Bombardier, the world’s third largest aerospace and transportation manufacturer, also has a presence in Morocco.

The minister added that Morocco exported $1.2 billion worth of aeronautical materials, and aerospace jobs increased by 50 percent in 2017..

Morocco’s strategic location helps to attract foreign investors because it represents a gateway to both Africa and Europe.

In 2016, foreign direct investment website fDi Intelligence ranked Casablanca among the 15 aerospace cities of the future, and 6th in the top 10 aerospace cities “in terms of cost-effectiveness.”

Nexteam’s headquarters are based in Marmande, France. According to the statement, it is a major player in the “world of aeronautics and rank 1 supplier of major customers.” The company’s main mission is focused on “the design, manufacture and support of aircraft and helicopter structures and flight equipment.” 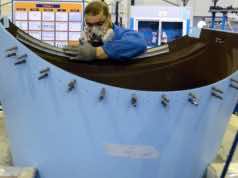