Thousands of people, both civilians and militants, have been cleared out of the village of Baghouz in eastern Syria, ISIS’ last stronghold. 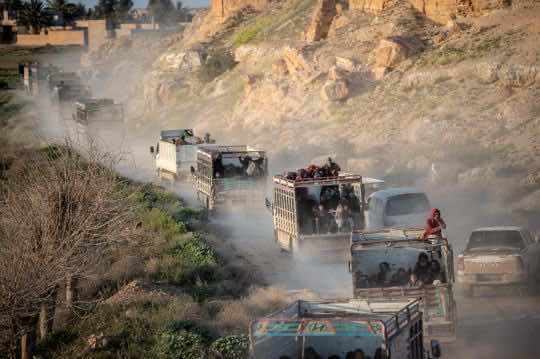 Rabat – The evacuation of 3,000 people from the last ISIS stronghold in Baghouz, a village in eastern Syria, has sparked a humanitarian crisis as Kurdish camps struggle to make room for the displaced.

The outpouring of people on Monday follows a standoff between US-backed forces and the remaining ISIS fighters over the weekend, with a torrent of airstrikes and artillery attacks.

Kurdish forces slowed down their attack on Baghouz Sunday night, concerned for the civilians that remain in the area that were being used as “human shields” according to a tweet from Mustapha Bali, the head of the Syrian Democratic Forces (SDF) press office.

An SDF official told AFP that “hundreds of ISIS fighters” were among the thousands that “surrendered.” The latest evacuees also include relatives of jihadists, as well as ISIS-held civilians, he added. The evacuation of people from Baghouz is expected to continue.

The surge of evacuees poses a challenge to the Kurdish camps, which are already under strain. According to the UN humanitarian coordination office (OHCA), over 15,000 people have arrived at the Al-Hol camp from Baghouz between February 22 and March 1. This pushes the population of the camp to 56,000. The OHCA added that the current influx is “exacerbating already dire conditions at the crammed facility.”

After months of sustained poor conditions in Baghouz, constant bombardment, and lack of food, families that arrive from Baghouz are often in bad physical or psychological condition.  According to the OCHA, around 90 people, mostly children under the age of five, have died en route to the shelter or shortly after arriving.

The fall of Baghouz, the last ISIS stronghold, will be a historical moment in the devastating 8-year Syrian conflict that has killed 360,000 people and made millions of others refugees.

Read also: The Fall of the ISIS Caliphate, a Victory Without Peace

Morocco’s Central Bureau of Judicial Intelligence (BCIJ) has estimated that 1,668 Moroccans joined ISIS in Syria, Iraq, and Libya. The BCIJ has dismantled 59 terror cells, 51 of which had ties to ISIS, since its creation in 2015, according to the head of the office, Abdelhak El Khiame.

In December 2018, the BCIJ arrested at least 22 men in connection to the brutal murders of two Scandinavian tourists in the Atlas Mountains. The men who committed the attack filmed themselves saying, “This is a revenge for our brothers in Hajin,” referring to another ISIS-held small town in eastern Syria, as they slit the throats of the two women.