Contractual teachers say the contract is “discriminatory,” and they want to enjoy a “sense of financial, social, psychological stability.” 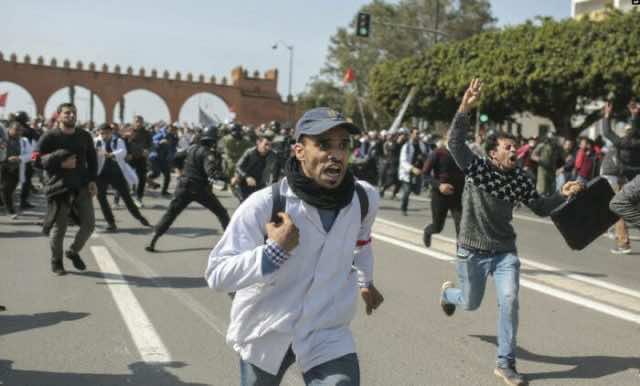 Rabat – Following contractual teachers’ protests in Rabat February 18-20, which left many injured, teachers are staging another week-long protest this week. Security forces had used water cannons, truncheons, and batons to push protesters back.

Starting March 6, a number of Moroccan cities are seeing large numbers of contractual teachers taking to the street in protest of what they called “discrimination and injustice.” The teachers are speaking out about the government’s “disregard” for their demands.

One protesting teacher, speaking on condition of anonymity, told Morocco World News, “We signed the contract, one clause of which states that upon passing the qualification exam after two years of teaching experience, the contract shall renew itself automatically each year.”

However, the teacher said the government did not administer a qualification exam for teachers hired in 2016. Instead, they were asked to sign an addendum to the contract.

The teacher explained that the addendum “was not part of the first agreement. This document shall not grant incumbents full integration into the academy. Rather, it curtails their rights and does not put them on equal footing with permanent teachers.”

Brought together by the Moroccan National Coordination of Teachers (CNPCC) and the National Federation of Teachers (UMNT), contractual teachers are engaging in a 6-day sit-in in several cities across Morocco, including Kenitra, Casablanca, Tetouan, Oujda, Errachidia, and Marrakech.

The two unions published a leaflet outlining the goals of the sit-in and listing why they are protesting.

Teachers say the contract contradicts the aims of the International Labour Organization, as stipulated in the declaration of its 26th session on May 10, 1944, in Philadelphia.

The groups listed two demands: “(a) full employment and the raising of standards of living; (b) the employment of workers in the occupations in which they can have the satisfaction of giving the fullest measure of their skill and attainments and make their greatest contribution to the common well-being.”

At the political level, teachers said they are protesting because plans for the actual contract were not outlined in the election campaigns of either coalition parties or those in opposition and, therefore, were imposed “undemocratically.” Legislative bodies, teachers representatives, and the union did not take part in the decision making.

Contractual teachers particularly object to the contract’s contentious clauses 4 and 13, which seemingly hands sweeping powers to “employers.” Now the academies pay contractual teachers. The contract can be terminated by academy higher-ups, like inspectors and directors, “to whose whims teachers on fixed-term contract are subject.”

“They can terminate the contract without prior notice if they saw them unfit for the position,” a contractual teacher who wanted to be referred to by the initials A.A., explained.

Teachers, however, can break the contract only after a one-year period. Clause 4 states that teachers are not entitled to be integrated into the public service sector.

Teachers felt they “had no option but to sign the contract, given the high rate of unemployment and promises that they would be granted full integration upon signing the addendum,” which “blatantly contradicts clause 4.”

However, to the teachers’ dismay, the contract is just another “instrument that will further put teachers under the thumb of academies,” A.A. argued.

Teachers want the government to guarantee their right to protest, a constitutional right, and disapprove of not being paid because of their protests. Some teachers allege that they were not paid their month’s wages in February because they staged protests.

Contractual teachers regard the contract provisions as “discriminatory” because they do not put them on par with permanent teachers. For example, contractual teachers do not get healthcare and pension benefits or the option to change jobs within academy ranks.

“We are trying to pressurize the government to redress this problem: To abandon the contract and grant us, without prejudice, our rights. We want to enjoy a sense of financial, psychological, and social stability,” A.A. emphasized. 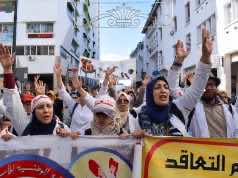 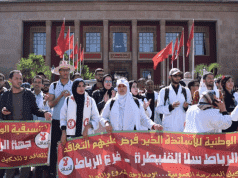