Morocco will play against Malawi on March 22. The Atlas Lions will also play a friendly game against Argentina on March 26 in Tangier.

Rabat – Coach Herve Renard has unveiled his official list of the 33 footballers who will take part in Morocco’s final qualifier game of the Africa Cup of Nations (CAN) against Malawi and the friendly game against Argentina.

The list includes Moroccan-Dutch Idrissi Oussama, who will be playing with the Atlas Lions for the first time after choosing to represent Morocco instead of the Netherlands.

Both Hamza Mendyl and Nabil Dirar, who played with Morocco in the 2018 World Cup, are not on the list.

The two Moroccan goalkeepers Munir El Kajoui,  who plays for Malaga, and Bounou Yassine, who plays for Girona, have made the list.

Although he missed multiple CAN qualifier games last year, the captain of the Moroccan football team Mehdi Benatia is on the list, as well as favorites Younes Belhanda, Amine Harit, Faycal Fajr, and Achraf Hakimi. 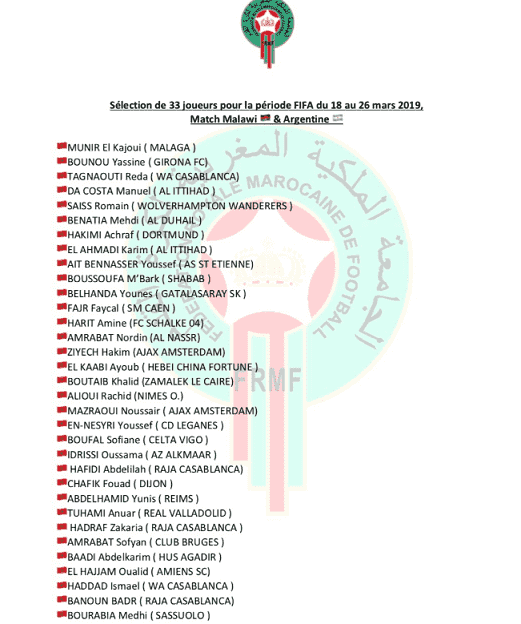 Morocco’s football team will play against Malawi on March 22.

Morocco has already qualified for CAN 2019 after defeating the Comoros in the qualifier games in November 2018. The defeat gained Morocco a qualification to CAN, also known as AFCON.

The Atlas Lions will then play a friendly game against Argentina on March 26 in Tangier.

The friendly match is part of the Atlas Lions’ preparation for CAN.