Local authorities in Merzouga ordered the closure of desert camps, causing protests in the region. 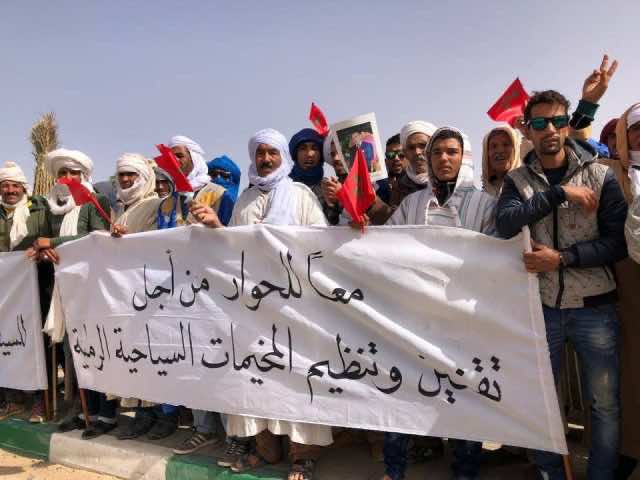 Rabat – The government is dismantling desert camps in the Erg Chebbi dunes of the Sahara, 40 kilometers from the city of Merzouga in eastern Morocco.

The local government hired workers to help dismantle tourist camps in the Merzouga region, according to a Morocco World News source. The government allegedly tore down approximately 12 camps last weekend, and the told the rest to vacate the area or be forcibly removed.

One luxury desert camp received notice that it must close but with no details of when or why, the owner told MWN. The camp has bookings until late 2020, which raises the question of what will happen to the guests who have booked or the camp owners with finances at stake.

The camp owner argued that the camps do good for the area and Morocco as a whole. Her business, she said, had “viguroulsy (sic) promoted Morocco, and specially Merzouga.” She asserted her company had “spent over 3 million dirhams in developing the camp and promoting Morocco.”

Those who have most at stake if the desert camps are shut down are the locals. Thousands of tourists visit the desert camps each year to experience Saharan sand dunes and provide the main source of local employment.

The camp owner MWN spoke to said they “source food locally and employ mostly local staff from the area,” which consists of a team of “42 workers, plus 3 other (sic) at the office.” Cameleers, food suppliers, and tour operators are also going to be affected.

It is of no question that the desert camps help the area economically, so why are they being shut down? Although no official answer has been given yet, either to the media or camp owners, it may be for environmental or security reasons. Concerns have been raised regarding waste and sewage disposal and water usage by the dozens of desert camps in the area.

There is allegedly no differentiation being made by the authorities between the camps that are registered and environmentally conscious and those that are unlicensed, “squatting” on the land and damaging the environment. Will all the camps in Erg Chebbi be given notice that they must close or do authorities have some kind of criteria to allow some camps to stay?

The luxury camp owner told MWN that her camp is a “registered Moroccan company with proper documentation and paying high taxes each month to the Moroccan government. We have proper insurance to run the camp.” She continued, “We have adequate security procedures in place at the camp to ensure the safety of everyone.”

The removal of the camps has received heavy backlash from the locals in Merzouga. On Monday, March 11, hundreds of locals protested the decision at a demonstration. The protesters waved Moroccan flags and carried banners, saying, “No to the unjust negative decisions” and “Together for dialogue for the legalization and organization of desert tourism camps.”

The National Union of Tourism and Transport also released a statement denouncing the actions of local authorities, saying the dismantlement of camps would hurt “our brothers, the professionals, and employers of the camps, and destroying their tents and will make a large number of the workers in the region unemployed.”

The union again reaffirmed its support for those affected, saying, “We confirm as the National Union of Tourist Transport belonging to the General Union of Democratic Workers in Morocco that we will support them due to the damage that this method will cause.”

Morocco Hits Back at Spain’s ‘Fuel Franchise’ Amid Growing Tensions