Moroccan radio network Medi1 has sparked an uproar after it called the shooting of an Israeli soldier in the West Bank a “terror attack.” 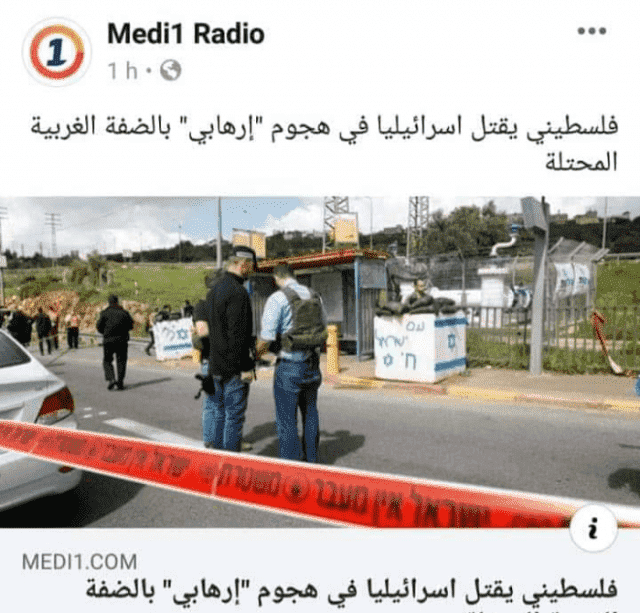 By
Ahlam Ben Saga
-
Ahlam Ben Saga is a Cultural Studies graduate from university Mohammed V of Literature and Humanities in Rabat.
Mar 18, 2019
Spread the love

Rabat – Using an Arabic proverb, Avichay Adraee, a lieutenant colonel in the Israel Defense Forces (IDF), pointed out that even a media outlet from a Muslim country, Moroccan outlet Medi1 “acknowledged” that a Palestinian killing an Israeli soldier is an act of “terrorism.”

Adrae, the spokesperson of the IDF, wrote on his Facebook account on Monday an Arabic expression used to show an ironic situation—originally mentioned in the Qu’ranic surah Yusuf—that translates to “A witness from the family testified.”

The Israeli spokesperson, who posted a screenshot of Medi1’s post, warned: “This is a cowardly terrorist operation whose perpetrator is a despicable terrorist we will hold accountable sooner or later.”

In the case of the Israeli-Palestinian conflict, pro-Palestinians fear the “normalization” of relations between Israel and Arab countries amid the oppression of the Palestinian people.

The Moroccan Anti-Normalization Center expressed anger at Medi1 and condemned the way it described the “Palestinian resistance” as a “terror” attack.

The center wrote on Monday on its official Facebook page: “Congratulations to Medi1 for earning the Zionist medallion given to it by the spokesperson of the Israel Defense Forces Avichay Adrea. This is disgraceful journalism.”

The page also posted a screenshot of Medi1’s post with the hashtag: “Normalization_treason.”

In a statement, the anti-normalization center stressed that the Moroccan High Authority of Audiovisual Communication (HACA) should inspect Medi1’s report. The center said the government should address any hint of “Zionist” propaganda published in the media.

In a shooting in the Israeli-occupied West Bank, a Palestinian killed an Israeli soldier, 19. Another was seriously injured.

Palestinian media reported that the Israeli military raided an area near Burqin, a West Bank Palestinian village, in search of the shooter.

Security forces are pursuing the Palestinian shooter, who is still on the run.

The anti-normalization center has addressed other instances of appearances of thawing in Israel-Morocco relations, including an educational children’s book published in Morocco that negated the existence of Palestine and described Jerusalem as the capital of Israel.

In January, the Ministry of Education denied that the book was “a schoolbook” published under its watch.

The Israeli-Palestinian conflict has persisted since the establishment of the Israeli state in 1948.

On December 6, 2017, US President Donald Trump formally recognized Jerusalem as the capital of Israel. Arab leaders, including King Mohammed VI, King Abdullah of Jordan, and King Salman of Saudi Arabia, condemned the move.