The only Moroccan who attended the Harvard WorldMUN conference hopes to inspire Moroccans to gain experience in diplomacy and politics.

Rabat – As the only delegate from Morocco, 22-year-old Noureddine El Bakali competed against some of the most experienced debaters in the world at the six-day Harvard World Model United Nations (MUN) in Madrid March 17-22.

During the conference, El Bakali was part of a field of 2,000 delegates from over 110 countries. “It was a pleasure to be there and represent Morocco in such [an] important event, I’m doing what I love and I would like to help my country to develop itself in the future,” said El Bakali.

El Bakali was born and raised in Al Hoceima, a city in northern Morocco, and began attending the Spanish Institute Melchor de Jovellanos when he was 5 years old. He is now studying political science and law at the University of Granada. This year, El Bakali is partaking in the Erasmus political science program at Sciences Po Bordeaux in France.

El Bakali began partaking in MUN conferences in 2017 and has since attended five conferences. In 2018, he took part in a conference in Madrid representing Morocco where his committee debated Moroccan sovereignty over Western Sahara. He has also acted as a delegate representing other countries, such as Spain, France, and South Africa.

El Bakali told Morocco World News the reason he partakes in MUN conferences is to further his diplomatic skills. “Diplomacy is what I would like to do in the future, and I hope that it will be for my country Morocco,” said El Bakali.

What is Model United Nations?

MUN is an extra-curricular activity where students roleplay as delegates to the United Nations and simulate UN committees. The purpose of the conferences is to provide students with opportunities and experience to debate and find resolutions to world conflicts. MUN conferences are held around the world at the middle school, high school, and university level.

Harvard World Model United Nations is the world’s most internationally-diverse university-level MUN and the largest outside North America. Over 2,000 university students came to the conference from over 110 countries. The conference location changes between cities around the world every year.

At the conference, El Bakali participated in a committee that roleplayed Spain’s governmental transition in 1975. El Bakali represented former Spanish Prime Minister Adolfo Suarez on the council of advisors of King Juan Carlos I of Spain. In his position, he advised the King of Spain during the transition following Francisco Franco’s dictatorship. Over five days of intensive debate, the committee wrote a new constitution and achieved democracy.

Throughout the conference, El Bakali interacted, learned from, and formed relationships with students from around the world, including Venezuela, Tanzania, and Canada. “We achieved democracy. It was very intensive debating with others (sic) advisors from all political spectrum, but we managed to do it,” said El Bakali.

As for Morocco’s role in the MUN, El Bakali was the only participant in the conference of over 2,000 delegates. “I would like to see in the future more Moroccans participating in these kinds of events because Morocco needs people who are prepared and MUN prepares us very well,” said El Bakali.

El Bakali believes that MUN is a special experience where students can get exposure to competitive students with advanced debating skills. While Morocco hosted two MUN conferences in the cities of Agadir and Ouarzazate in 2019, MUN clubs and conference have yet to gain popularity with Moroccan youth.

“Morocco needs to invest more in political studies because at this moment I don’t see in Morocco the interest in politics as I see here in Europe. I would like to organise in the future a Model United Nations Conference in Morocco,” said El Bakali. “Moroccans are good at having relations with people from other countries and that’s very important in diplomacy,” he continued.

Petitioning the King of Spain

Beyond taking part in the conference,  El Bakali also had the opportunity to meet several prominent political figures, such as Spanish Minister of Science Pedro Duque, President of the Community of Madrid Angel Garrido, and King Felipe VI of Spain. During El Bakali’s meeting with the King, he delivered a petition concerning the name of his hometown of Al Hoceima.

The petition, written by El Bakali, asks the King to grant Al Hoceima the title of “villa.” The town’s name in the 1920s, “Villa Sanjurjo,” became “Villa Alhucemas” in the 1930s. The city’s name comes from the Spanish word Alhucemas, meaning “lavenders.” After Moroccan independence, the name was Arabized to Al Hoceima and followed French spelling.

The Spanish King is the only person capable of granting the honorary title of “villa” to any city due to the historical and cultural significance of the title. According to Filipino historian Luciano P.R. Santiago, the title is a “territorial classification” which “comes with a coat of arms.”

El Bakali believes the name change could attract more Spanish and foreign tourists, since the symbolic title of “villa” is held by other important cities, such as Madrid.

“I think that it would transform Al Hoceima into a precious city of great cultural interest,” said El Bakali. The name change “may contribute to the prosperity of the city’s tourism after suffering from economic recession with a lack of job opportunities,” he continued.

In 2007, the mayor of Al Hoceima stated that all new houses would be painted blue and white in efforts to restore the city’s traditional appearance. Members of the town are seeking to boost tourism in the region, drawing on the historical significance of the region and its Spanish influence.

El Bakali received support from his family and friends for the petition but has yet to receive greater support from the town. This in part may be due to a lack of understanding of the title’s significance. “I tried to speak and I sent messages to newspapers from my region, but they did not answer me. It’s sad for me and I’m a little bit disappointed,” said El Bakali.

After delivering his petition directly to the King of Spain, El Bakali hopes his voice will improve the state of his community of Al Hoceima as well as inspire Moroccan youth to become interested in diplomacy. 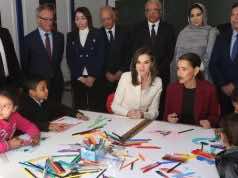 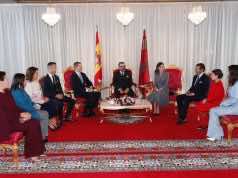