Morocco World News
Home Highlights on Morocco King Mohammed VI: Abrahamic Religions Were Created to Open up to One... 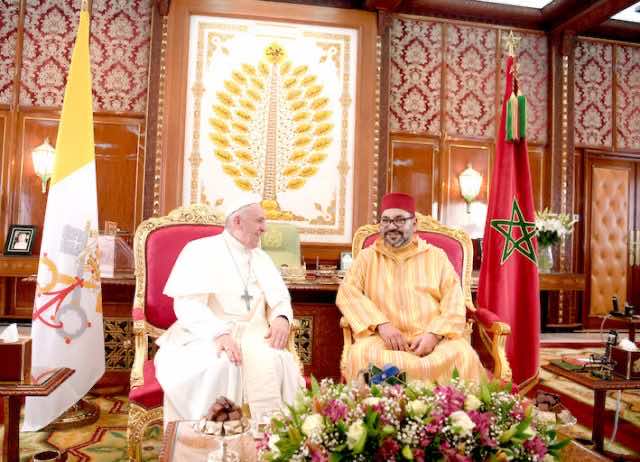 Rabat – In a speech delivered at the Esplanade of the Hassan Mosque on the occasion of the official visit of his holiness Pope Francis to Morocco, the Sovereign underlined the importance of education to tackle radicalism.

Investing in education to counter extremism

The three Abrahamic religions, according to the King, were created “to open up to one another and to know one another.” Religions offers venues to fight against radicalism through knowing one another, which will help rise to the challenges of our tormented times through education, King Mohammed VI.

“To tackle radicalism, the solution is neither military nor financial; that solution has but one name: Education,” the monarch said. He noted that in the face of ideology-linked violence and extremism prevailing in many parts of the world today, “it is clear the dialogue between the Abrahamic religions is insufficient.”

The Moroccan monarch pleaded for rethinking the role of education in the struggle against extremism. In his view, ignorance, or erroneous interpretation of the peaceful and humanity-celebrating messages of religions, is the primary source of many of the problems facing the world. He said, “My plea for education is an indictment of ignorance. It is binary conceptions and the fact of not knowing one another well enough that are threatening our civilizations; it is certainly not religion.”

When taught, understood, and practiced as recommended in the Scriptures, religion can be a source of blossoming relations between people and countries, King Mohammed VI suggested, Sovereign pointing out that what all terrorists have in common is not religion, but rather ignorance of religion. He said they instrumentalize religion and rob its purpose of spreading peace and mutual understanding.

Religions are meant to be beacons of hope and peace

Religion, the King noted, is Light, Knowledge, Wisdom and Peace, and it should no longer be an alibi for ignorant people using it to spread ignorance and  intolerance.

“That is why, as Commander of the Faithful, I am advocating today that we give back to religion its rightful place in education,” the King said.

Pope Francis’s visit is taking place at a time when the Community of Nations – just like that of all Believers – is facing a number of challenges. And to rise up to such crises, the King said, “we need to tackle these new ills which feed on treachery as much as on the instrumentalization of the Divine Message by advocating the denial of the Other and similar wicked theories.”

In a world in search of direction, the Kingdom of Morocco has never stopped proclaiming, teaching and experiencing, on a daily basis, Brotherhood among the Sons of Abraham, the Sovereign stressed, adding that this is a founding pillar of the exceptionally rich diversity underpinning Moroccan civilization.

The symbiotic relationship uniting Moroccans – beyond their faiths – is an eloquent example in this regard, according to the King.

He underlined that the symbiosis is a reality in everyday life in Morocco, and is reflected by the mosques, churches, and synagogues which have coexisted in the cities of the Kingdom for centuries.

Security and peace have been Morocco’s distinctive marks in a region mostly associated with socio-economic crises and political strife. Part of Morocco’s successful security architecture comes down to the series of reforms the King launched since 2015 to reinforce Morocco’s position as a fortress against extremist discourses.

King Mohammed VI particularly recalled the setting up of the Mohammed VI Ulema Foundation and the Mohammed VI Institute for the training of imams as well as male and female religious guides. Over the years, the institute has received young people from several European and African countries. It has been touted as the nest of a new generation of imams, versed in subjects as diverse as philosophy, theology, and psychology, but also equipped to deal with the complexities of the modern world.

The leadership the world needs

King Mohammed VI said that his meeting with his holiness Pope Francis attests to a mutually held belief that the values of monotheism contribute to rationalization, to reconciliation and to improving the world order.

“As Commander of the Faithful, and just like Your Holiness, I am against all forms of indifference and I wish, in this respect, to salute the courage of the Leaders who do not shy away from the defining questions of our time,” the monarch underlined.

The Sovereign also said that he has been following with interest and appreciation the efforts made by his holiness to serve peace in the world, as well as his regular calls to promote education and dialogue, to end violence, to combat poverty and corruption, to tackle climate change – to fight the ills plaguing human societies.

“Our messages do not concern our time only; they are eternal. They call upon people to embrace the values of moderation, to fulfil the imperatives of knowing one another and to raise awareness of otherness,” the King pointed out.