Pope Francis has warmly spoken about his recent stay in Morocco, touting the country for its diversity-encouraging everyday culture.

Rabat  – Pope Francis, who visited Morocco for the first time on March 30-31, has expressed satisfaction with his stay in the North African country.

On his way back to the Vatican after what he called a delightful two-day stay in Morocco, Pope Francis told the press on board his flight that his trip gave him the image of a “beautiful flower of coexistence.”

The Pope, who had a busy schedule in Morocco, called  for the preservation of coexistence to transcend the difficulties “which unfortunately exist because there are intransigent groups.”

The Pope also criticized US President Donald Trump, saying that “those who build the walls will end up trapped in the walls they build.”

In speeches throughout his Moroccan stay, Francis reiterated his faith in principles of international solidarity and interreligious dialogue. He said that the world should invest in   building bridges, not walls.

“Those who build bridges are moving forward. The bridge is for human communication, it is very beautiful and I have seen it here in Morocco.”

Appeal for a universal and multireligious Jerusalem

In Morocco, the pope and King Mohammed VI signed a document they called “the Jerusalem appeal.” The move aimed to garner support in the international community to reclaim the multi-religious character of the city of Jerusalem, which is considered holy site by all the three Abrahamic religions.

The Pope said that believers of all faiths want a free Jerusalem , and described the appeal he signed with the King describing it as a “step forward” in the struggle against regimes and leaders who oppose the universality of Jerusalem.

The move to sign the document, Pope Francis argued,  was not the reflection of his and King Mohammed VI’s deep convictions alone. Rather, the appeal is an alarm call from“brother believers who suffer to see that this city of hope is still not as universal as we all want it to be.”

More than an agreement, the appeal is “a desire, a call to religious fraternity that is symbolized in this city that belongs to all of us,” the pope stressed.

Pope Francis also addressed the issue of migration, emphasizing that he is against the drowning  of migrants in the Mediterranean.

“Welcoming, accompanying, and integrating remain the key values of the solution to be developed,” he asserted. Pope Francis left Morocco on Sunday evening after a two-day trip  in which he repeatedly preached politico-religious tolerance and coexistence.

An estimated number of 10,000 people attended the pope’s mass at the Moulay Abdellah Complex in Rabat. The papal mass was a watershed in the history of Morocco’s growing population of Christians,  most of whom are said to be expats and migrants from sub-Saharan Africa.

“ Thank you Morocco for this opportunity. Thank you our father for your message of hope. Thank you my pope for coming,” the crowd chanted in chorus as the pope concluded his mass. 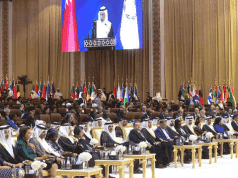