The suspects were carrying 30,000 ecstasy pills and large amounts of cash in Moroccan currency.

Rabat – Tangier prefectural police arrested four suspects on Thursday for possession of and dealing in large amounts of drugs and psychotropic substances.

Working with the General Directorate for Territorial Surveillance (DGST), the police caught the primary suspect who had been wanted, in the middle of a drugs transaction in with another person coming from Casablanca.

The suspects were in possession of 30,000 ecstasy pills and large sums of cash in local currency.

Police also arrested two other suspects they believe to have been acting as middlemen for the drug ring.

The DGSN announced in a statement that “the suspects are placed under police custody pending further investigation before the prosecutor general.”

The DGSN stated that the arrests are part of its intense search operations to combat drug dealing.

Lately, Moroccan authorities have cracked down on a number of suspected drug dealers and criminals. 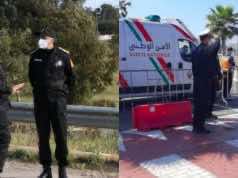